How to Motivate Your Team 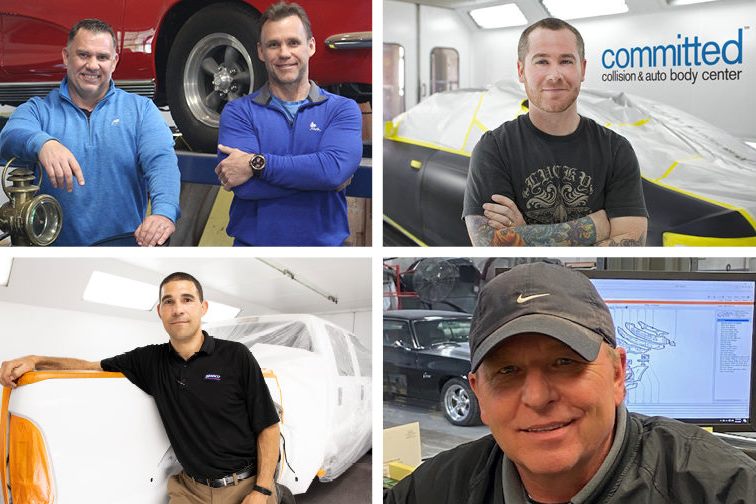 Here we provide various examples of how to motivate your team by using many ways like exhibiting honesty, empathy, and selflessness, not to mention boundless passion for the industry.

Of course, in the collision repair industry, it’s not always easy to motivate employees that might feel their repair knowledge is vast and unending, those who may not like multiple co-workers, or whom may feel underpaid.

Yet, the stories that follow in this feature shine a light on shop leaders that earned a devoted following from their employees. They did so using many ways.

They didn’t ascend to the status of unquestioned leader without learning a few lessons along the way. The four pages that follow detail those lessons for FenderBender readers …

The Olender Brothers: Leading By Example

There’s a reason why Jeff and David Olender wear workboots most weekdays. Hard work was instilled in the shop co-owners from a young age.

From the time they were young boys, welding toy Tonka trucks at Olender’s Body Shop Inc. in Vernon, Conn., the brothers learned the value of setting an example through grit and determination. That lesson was further reinforced years later, when the founder of the family business, the boys’ grandfather, Joseph Olender, fought off a dire leukemia diagnosis and lived for nearly three more decades.

“Everybody has to work hard, and that includes the people whose names are on the sign,” Jeff Olender says. “We’re boots-on-the-ground owners—there are no absentee owners here.”

But, Jeff Olender adds, “I don’t wanna sound like we micromanage the business. We macromanage it.”

Yes, while the Olender brothers don’t hesitate to write the occasional estimate or greet a walk-in customer, they’re not working excessive overtime. They’re simply setting a tone in their two Connecticut shops.

“Working hard doesn’t necessarily mean beating on a panel,” Jeff Olender says. “Working hard means getting your inroads with the insurance companies, going out of your way for your community.”

And that philosophy tends to inspire buy-in from employees. For proof of that, look no further than on the Olenders’ shop floor, where no less than 15 of their employees have worked with the company for at least a decade.

“My brother and I have never had anybody that works for us; they work with us,” Jeff Olender says. “We all work together.”

Here are the other basic tenets the Olenders abide by to create a motivated, nearly 60-person staff that combines to produce $13 million in annual revenue.

count of 200 for collision work. And the best way to generate such production, Jeff Olender says, is by generating some healthy competitiveness among employees by posting efficiency reports.

Those performance reports are “posted at both shops, so employees know exactly

Give back to the community. The Olenders don’t just give ‘til it hurts, donating no less than

$5,000 to charity most years. They also get creative with their donations. Beyond sponsoring several youth and high school sports teams, the business also participates in Safe Grad programs and the DARE anti-drug initiative.

The Olenders get creative with their charitable endeavors, too. For instance, four years ago, the collision repair business donated $5,000 for a scoreboard for a local youth baseball league—and now that scoreboard bears the Olender name, offering a bit of advertising in virtual perpetuity.

“We work hard,” Jeff Olender notes, “at maintaining our relationships with our neighbors.”

A few years back, when Derek Lighthall became a shop owner, he had neither a high school diploma, nor much money. His facility was modest, to say the least, at perhaps 700 square feet.

By 2020, however, Lighthall’s shop, Committed Collision & Auto Body Center, had increased 10 fold in size, was receiving 5-star reviews, and began bringing in about $250,000 per month.

The 36-year-old New Hampshire shop owner notes that, while there’s no shortcut to success in business, acting in an open and honest manner with your employees always helps.

“I’ve found that the best way for me to manage people,” Lighthall says, “is to kind of let them self-manage themselves. And, in doing so, they become committed to stamping their name on every job they do.”

Due in no small part to the fact he spends more time with his employees than he does with his loved ones, Lighthall ensures that his staff is well-provided for. The dozen employees at the high-volume, New Hampshire I-CAR gold-certified shop receive perks like flexible time off, two weeks of vacation, and health benefits that are half paid by their employer. Lighthall has even gone as far as to make down payments on homes for employees.

“Half the shop makes more than I do,” Lighthall, 36, says. “And that’s because, without them, I wouldn’t be here. Without them, the customers wouldn’t be getting what they deserve, and we wouldn’t be able to sustain growth.”

All told, Lighthall has attained buy-in from his staff by utilizing a couple relatively easy focuses:

Use team-building exercises. Lighthall isn’t shy about hosting summer cookouts, or even

taking his staff on a one-hour trek to a Boston Bruins hockey game. Similarly, Committed Collision employees receive homemade desserts on birthdays and holidays from shop manager Taylor Dahme. And, the shop’s owner has even replaced engines in employees’ vehicles if they couldn’t quite fund for it.

It’s all in an effort to get the New Hampshire shop’s employees to relate to each other.

“In the body shop business, one of the hardest things is getting everybody to see eye to eye,” Lighthall explains.

says, if shop owners hire the right people and express belief in them. To aid that process, the New Hampshire shop owner tries to hire job candidates who share some of his traits, like competitiveness and an unending desire to improve—often, for example, he hires entry-level employees who have worked as part of a restaurant’s wait staff previously.

“During the hiring process, I know that I’m getting people that rationally think like I

do,” Lighthall says. “I only hire if I feel that you’ve got a huge amount of potential.”

Ivan Montoya: Leading the Next Generation

The greatest gift a shop owner can give their employees, in Ivan Montoya’s opinion, is empowerment.

At Montoya’s three Maaco shops in the greater Tampa, Fla., area, he trains young hires in a trial-by-fire manner. He has no qualms about seeing a rookie swing and miss a couple times if he feels they have home-run potential.

“I let my employees try to figure it out on their own, with training,” says Montoya, in his 18th year in the industry. “Grudgingly, I let them make mistakes one or two times, so at least they’re learning. And, in the long run, they then feel more comfortable with themselves—they’re not afraid to attempt something.

“Anybody’s going to work happier and more productively if they’re not being micromanaged.”

That philosophy has served the Florida shop owner well. Not only do his three shops

combine to produce nearly $5 million in annual revenue, but Montoya has built a reputation within the Maaco chain for grooming high-performing employees and managers.

“I try to let employees learn how to manage things,” the shop owner says, “so that, at the end of the day, I don’t have to be at three places at once.”

Montoya has used a multi-pronged approach to build an efficient—and largely self-sufficient—50-person staff in Florida. The key elements of that leadership approach include:

Carefully assemble an office staff. Simply put, Montoya only hires front-office employees that he’s confident he can trust, that have a willingness to learn, and that possess a knack for salesmanship. He feels a solid front office is the foundation of many profitable shops.

“I  bring in young hires, build them up, and train them in the office,” the shop owner notes. “That way, in the long run, they can support me here and I can be out (in the shop) making sure everything’s run properly and efficiently.

“For the front office, we look for individuals who are highly motivated and professional. Ideally I like to find people that have a positive attitude along with some selling experience, whether that be within the auto industry or outside it, such as even a bartender.”

Express belief in employees. A while back, a final prepper at a Tampa-area Maaco shop expressed gratitude to Montoya for the fact that he let her work without looming over her, watching her every move. That’s how Montoya leads employees these days: by coaching them up, rather than tearing them down when they make the occasional misstep.

“I teach them, I train them,” he says of young hires. “I let them loose with a very long leash. I believe they learn by watching me, and then knowing that, after they’re doing taking care of a client, I’m their support, telling them ‘Here’s what you did right, here’s what you did wrong.’

“That way,” he adds, “they’re comfortable and confident.”

Jeff Newberry got nudged into the world of body shops at age 15, when he was urged to sweep the floors and remove scrap metal from his father’s shop.

It didn’t take long for a passion for the industry to take hold of Newberry, who found life as a technician to be one big rush of adrenaline.

Over 40 years later, he’s as energized about shop life as ever, as the managing partner of two Jay Wolfe Body Shops in the Kansas City area. These days, Newberry finds the task of leading a shop staff especially fulfilling.

“Accountability is key,” Newberry says. “If you don’t know how to approach people, that can hurt your business. Everybody’s got to be on the same page.”

Newberry has endeared himself to employees by speaking to them respectfully, rather than acting as if he’s above them.

“I don’t wear a tie,” he says. “I wear blue jeans and boots, because I’ve gotta get out there. I want to still be involved in that daily activity out in that shop.”

Of course, just acting like “one of the guys,” isn’t enough to lead a body shop to the success that Wolfe Body Shops have attained―$9.9 million combined among two body shops that produce an average monthly car count of 472. Here’s a look at the other steps Newberry has taken to inspire immense productivity from his staff.

Control cost as a group.  One mantra Newberry emphasizes is controlling the everyday usage of materials, utilities, and equipment. From Day One at Wolfe Body Shops, he tells

technicians and estimators to approach their bay or desk area as their very own business.

When he gets his commision-based employees to think like that, it usually helps them push themselves.

“I tell technicians, ‘If you don’t run a good business, none of the estimators are going to want to do business with you,’” Newberry says. “And, when that syncs in and they start making some big hours consistently, then they want to work together.”

Emphasize team. Newberry feels a shop’s front office and technicians need to be on the same page, with similar overall goals for the business.

In his experience, if every employee at a shop is working in unison to efficiently move vehicles from the refinish department to detail, to delivery, for example, then the facility tends to produce top metrics like Wolfe Body Shop’s 92 percent CSI score.

And, he adds, that teamwork becomes contagious.

Have frequent performance reviews. At Wolfe Body Shops, which has 42 combined staff members, many employees undergo weekly performance meetings to track their productivity. Newberry subscribes to the philosophy that you can’t improve what you don’t measure.

“I don’t give technicians a $100 bonus if they hit 100 hours. I don’t want to have to bribe them to do more hours,” he explains. “I want to work with a tech that wants to make the most money they possibly can.

What is your experience with motivating your team? What leadership and motivational techniques have worked for you and your team? Let us know in the comments below. Also, if you found our content informative, do like it and share it with your friends.