Remaking A Shop’s Image From The Inside Out 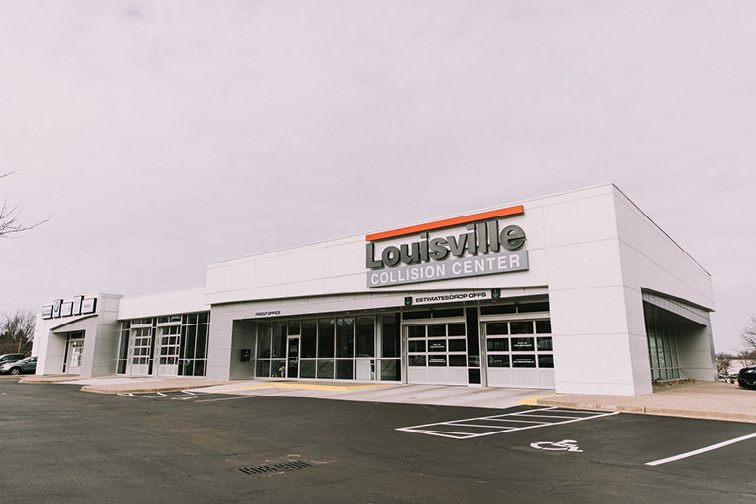 To get rid of someone else’s bad reputation, you start with remaking the shop’s image from the inside out.

No matter how you cut it, Louisville Collision Center is a gorgeous facility, a body shop that moonlights as a posh lounge.

Located about 15 minutes east of downtown Louisville, Ky., the 39,000-square-foot shop resides in a building that was formerly a BMW dealership.

Beautiful exteriors, though, only go so far if the inside, and what goes on in there, isn’t high quality—a sleek image is only as good as the work that backs it up.

In fact, just a half decade ago, the business that became Louisville Collision Center was known for being tough to work with, stingy about investing back into the shop, and was generally held in low regard.

The company, both in terms of looks, but more importantly, operations, has turned things around. 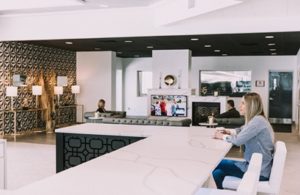 Experience To Build Upon

That’s what it was called five years ago when Steve Olson took over as GM of the then 16,000-square-foot facility, which, at the time, was, at best, treading water.

Olson got his start in collision repair detailing cars in a Pennsylvania body shop as a wash boy and detailer. He nearly never had a career in collision repair, graduating from college with a degree in broadcasting. He says he had no interest in working the graveyard shift at some small TV station, so he returned to what he knew.

Olson says the opportunity to turnaround Sam Swope Collision showed itself, when, six months into his tenure there, it came under new ownership. He’d come up through the ranks of collision repair after college, working at a Toyota collision center in Lancaster, Pa., eventually as its production manager, and worked at more shops after getting married and moving to Louisville.

“It became a chance to reestablish who we were,” Olson says of the ownership change, “and that’s when we took the name Louisville Collision Center.”

“It’s just not the facility, it’s the person that’s handling the technicians inside the facility. Let’s face it—anybody can go out there and build a new building. But you can’t overnight build the culture that he’s built.”
—Mike Porro, managing partner of Louisville Honda World

According to Olson, now managing partner of Louisville Collision Center, his previous operation—Sam Swope—had an image problem.
The bosses prior were known for not spending on equipment, certifications, or training.

“The vibe was that management had operated on the precedent of not spending any money,” Olson says, noting the center also had a reputation for being very combative with all insurance companies.

Mike Porro, managing partner of Louisville Honda World and the aforementioned bourbon aficionado, says his relationship with the shop’s past management was fraught.

“I had a lot of headaches with Steve’s predecessor,” says Porro, whose dealership was once under the Sam Swope umbrella.

“I sell 3,000 cars per year, new and used,” he says. “I used to sublet out my bodywork to someone else outside the Sam Swope group.”

While Olson has twice beautified the collision center—once in the space he took over, and again for the new 39,000-square-foot location—Porro says makeovers can only do so much.

“It’s just not the facility, it’s the person that’s handling the technicians inside the facility,” he says. “Let’s face it—anybody can go out there and build a new building. But you can’t overnight build the culture that he’s built.” 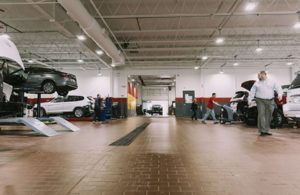 Inside look of the modern workshop with optimally designed layout

Steve Olson, managing partner of Louisville Collision Center, has twice updated the shop, more recently, by moving into a new building, and before, by renovating its existing space.
A major aim of that renovation was to improve his employees’ working conditions in order to foster better repairs and customer service.
“The place was super dark, the lighting was inadequate, it just didn’t look good,” he says.
To improve the situation, Olson says he installed LED lighting throughout, decluttered the space both in terms of cleanliness and by opening it up as much as possible, and by installing air conditioning.
“That goes back to your technicians—you need to take care of them,” he says of the AC, underscoring the point by noting that the average technician is in his late-30s and that the industry needs young talent. “You need to take care of those guys.”

Olson says when he took control of Sam Swope that changing the shop’s culture was a top priority.

“I’m a huge culture person. I’m huge on the team and the quality of the staff,” he says. “The first thing I said on day one, I said in order to be here you need two things: skill and will.”

From that starting point, of an original complement of 28 employees, just five stayed. Olson says he aimed to create an atmosphere where everyone, from management down, worked to win as a team. When there’s shared success, folks are content.

From zero certifications, the shop is now certified by BMW, Lexus, Volvo, Infinit, Honda and Acura. Olson says certifications are a commitment of both time and money—35 classroom days are required for BMW technician certification, and he pays for it all—but in the end, it’s worth it.

“There’s a huge expense in training your people but you have to do it,” he says. “Our biggest marketing right now in Kentucky is that we’re the only BMW-, Lexus-, and Volvo-certified collision center in the state.”

Olson says the shop’s commitment and investment to training signaled to area dealers that its culture was changing.  For instance, he says, “Lexus’s covenant is treating every guest like they’re in your own home.”

Dealerships, Olson says, weren’t rushing to refer work to a collision center that previously had a conflict mentality, and he was determined to change that perception through action and training.

“They had to know that that customer would be taken care of, and they’d be happy,” he says.

Rebuilding a team and working toward certifications takes time, Olson says, so for a long while there was never a big reveal or large marketing push for the shop.

“The last thing we wanted to do was have this huge, official launch and not be who we want to be,” he says, pointing out that most of Louisville Collision Center’s marketing is on social media—Facebook and Instagram.

Still, after years of improvement and achievement, there was reason to do something.

“I guess over the last five years as we’ve had that success, as we’ve achieved OE certifications and won two national awards,” Olson says, “we felt our building needed to reflect our ongoing success.”

“We didn’t know social distancing even existed back [then],” he jokes.

Louisville Collision Center promotes itself through soft marketing—its OE certifications, strong relationships within the local auto industry to promote referrals—and on social media, says Steve Olson, its managing partner.
The holder of a little-used degree in broadcasting, Olson says a Facebook campaign early in the COVID-19 pandemic, during an eight-week shutdown, allowed him to flex some on-air muscle.
“I did Facebook live videos every Monday, live from a [local] restaurant, and invited that owner to talk about how their business was affected,” he says, explaining the aim was to help them tell their stories and to remind folks the local eateries were still there.
Olson says the live videos doubled as mental health checks at the restaurants, alongside promotion.
“Our main goal was [to include] locally, individually owned restaurants,” he says, noting he’d usually end up buying lunch for his team while also trying to give the spots a boost. “They were really receptive, they really appreciated it.”

Servicing higher-end vehicles means customers come in looking for a continuation of the experience of buying and driving their cars, Olson says—there’s an expectation.

Louisville Collision Center has dedicated estimate bays, he says, and while estimates are being written, customers are shephereded to a lounge area where they can sit by a fireplace.

Megan Williams, who with experience in the collision repair industry went on to co-found 3P Marketing Solutions, a digital marketing firm, says she’d heard buzz about Louisville Collision Center, a company with which she’s never worked.

Beyond the obvious need for proper repairs and strong customer service, she says a facility’s looks make a difference. She also notes that, statistically, the majority of people getting collision repair estimates are women.

“Being a younger woman … it’s really important to me to be able to go online and see what their facility looks like, and that’s where I make the decision whether to go there, or not,” Williams says. “It’s just way nicer than any other shop I’ve ever seen.”

Of course, she adds, that its looks wouldn’t matter for much if it didn’t have strong customer service and do quality work.

Louisville Collision Center finally had its big grand opening party on Feb. 6, 2020. Olson says he invited members of the local industry, those who work at dealerships and in insurance.

“If I know that a local insurance agent has seen this place,” he says, “I have no doubt they would refer us.”

From its estimation bay to the delivery bay, where customers are reunited with their vehicle—”Just like when you get a new car,” Olson says—the center is aiming at superior experience coupled with certified repairs.

Porro, of Louisville Honda World, who also serves as treasurer of the Greater Louisville Auto Dealer Association, says the shop is hitting its marks.
“With me, it’s twofold,” says Porro. “He’s taking care of my customers who are in collisions. The certification takes it to a whole new level of transparency.”

Beyond that, Porro says there’s buzz around town about Olson’s operation.

“I think there are just as many dealers that admire him, that are jealous of him,” Porro says. “He’s got everybody on notice. They’re playing catch-up.”

What’s your thoughts on turning a shop around that has a bad reputation? Where would you start? Let us know in the comments below. Also, if you found our content informative, do like it and share it with your friends.