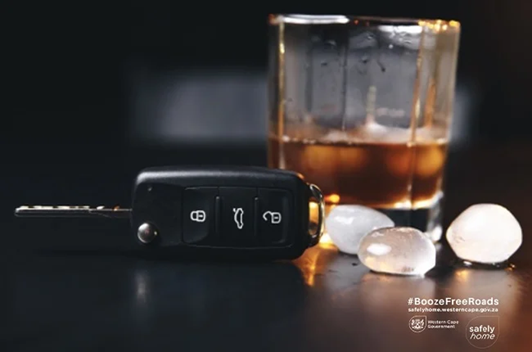 In 2021, a law prohibiting South Africans fromdriving after just one drink will come into effect. Safely Home by Western Cape Government.

The days of having a beer after work and driving home will soon be over – and that’s not just because of the lockdown restrictions. Once South Africa’s strick new drunk-driving laws are passed later this year, you won’t be allowed behind the wheel of a motor vehicle after even one drink.

Transport Minister Fikile Mbalula says the National Road Traffic Amendment Act, which will be in force by June 2021, will totally prohibit the use and consumption of alcohol by all motor vehicle operators on South African public roads.

Currently, it’s still legal to get behind the wheel if your blood-alcohol level is under 0.05g per 100ml. The new bill adopts a zero-tolerance approach to drunk driving by setting the legal blood alcohol limit for driving at 0%.

This has serious implications for South African drivers. If you’re involved in an accident after having even a single drink, you won’t just find yourself on the wrong side of the law, but it can also have a significant impact on your insurance.

Insurers have the right to refuse to pay accident claims if the driver’s blood-alcohol level is over the legal limit. The clause is included in almost every car insurance policy in SA. Previously, it was difficult to determine whether people were over the legal limit and whether their driving ability was impaired. The new zero-tolerance approach removes this grey area.

If you break the law by driving with alcohol in your blood, your insurer will have no obligation to meet your claim. If you’re guilty of this offence, it’s also likely that your premium will increase significantly, as you’ll be considered a higher risk. In the worst-case scenario, if you’re convicted of drunk driving or have your licence endorsed or suspended, your current insurer may cancel your policy, and you may find it difficult to get car insurance at all in future.

While the new law will potentially reduce the number of accidents caused by drunken driving, it won’t immediately affect premiums. If we see fewer accidents due to fewer drunken driving incidents in the long term, though, we may see premiums coming down due to lower claims costs for insurers.

The new law won’t see existing policies being altered, as most policies already stipulate that drivers must abide by the law. Therefore, the 0% legal blood alcohol limit will apply as soon as the new law comes into effect.

The bottom line? If you’r going to drink alcohol, make sure you have alternative transport.

Sime insurance companies, such as King Price, allows clients to add the “king’s cab” service, which gets the driver and their car home safely when it’s not a good idea to drive. It’s small additional cost for major peace of mind. Or make Uber your friend, or get a designated driver. But make a plan. It’s just not worth taking the risk of getting behind the wheel.

What are your thoughts on the proposed Zero-tolerance Drunk Driving Law? Do you think it will reduce alcohol related accidents? Do you think it will have any impact on your insurance premium? Let us know in the comments below. Also, if you found our content informative, do like it and share it with your friends.