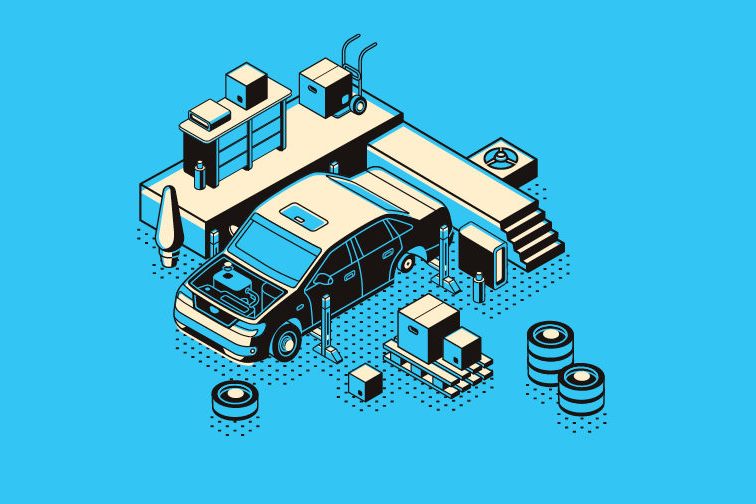 In northwest Kansas, just a couple hundred miles from the geographic center of the U.S., Lonnie Teeter is doing his best to upend expectations.

“‘You can’t have a modern collision facility in rural America, it just doesn’t work,’” he says, echoing an imagined naysayer. “We proved it does work, it can work, but it requires you to pour a lot of investment back into your company.”

Teeter and his shop, Morrill Collision Repair, which he owns with his wife, Melanie, is part of a rarified group of collision repair shops that have six or fewer employees.

Though 38 percent of respondents to the 2020 FenderBender Industry Survey, owners and managers, said they run shops of that size, just a handful of those 167 responding small shops perform as well as the Teeters’ business. Morrill Collision, which also offers towing, brings in more than $1.3 million per year.

FenderBender spoke to the Teeters and others who operate small but mighty shops to find out what makes them go, and some patterns emerged: they dominate their area, they’re independent with dedicated ownership or management, and they strive to stay on the cutting edge.

“There weren’t a lot of options around here, either we went into business by ourselves or we moved into a city, and we did not want to move into a city.” —Lonnie Teeter, owner of Morrill Collision Repair, Inc.

It’s been a struggle recently for Teeter to find a secretary for Morrill Collision Repair, but he says he thinks he’s found someone special in Jocelyn Payne, who’s been with the shop for about a year.

“What we really, really appreciate about her is that she’s a people person and a people pleaser,” says Teeter. “Just making people feel welcome, they matter and their problems matter.”

Morrill Collision is located in Morrill, Kan., a town of about 230 people.

Teeter says his six-person staff includes himself and Melanie, along with their two sons, Jerome and Jordan, a technician, and Payne.

The nearest cities are Kansas City, Lincoln and Omaha, Neb., all about 100 miles away, he says, and travelers’ troubles are a good driver of his business.

“As a result of us being so far out, we’ve structured our business to provide rental cars for our customers while they’re traveling and have a problem—we can tow them in here and get them in a rental,” says Teeter. “They can go on their way and we fix their car. Or we tow them to the city.”

While the towing side of the business is lucrative, bringing in $525,000 annually, collision repair is still Teeter’s bread and butter, with sales of nearly $850,000 per year.

Teeter says he started his shop in 2000 after working as a technician for others, housing it in his garage for the first 10 months. Through 2008, Morrill Collision offered auto transport, something Teeter says was important to keeping cash coming in when the collision repair side of the business was slow. He started towing in 2011 to continue having multiple streams of income.

He’s constantly putting money back into the business—he now has a small fleet of wreckers—and Teeter says his body shop is fully outfitted.

“I can tell you without hesitation that we are the only [shop in the area] with all of the state-of-the art technology in our industry,” he says, noting the shop is I-CAR Gold-certified, uses waterborne paints (the only shop in the area to do so), has a modern downdraft paint booth, and uses laser measuring systems.

“With all of my competition,” Teeter says, “all of them with the exception of the dealership body shop, they don’t put any money back into their business. It’s just a typical, small town dirty collision shop.”

Teeter says his father raised him to do things right the first time, and that doing quality collision repair work requires the right equipment. Melanie says too that quality in a place like Morrill is crucial.

“Where everybody knows everybody in the small community, basically our name is riding around on all these vehicles. People know that this is where they got their car fixed, so if there’s something wrong … a bad experience gets spread around quicker than a good experience,” she says.

Teeter says he’s been looking all year for an estimator—both he and Melanie write estimates, and he’s often gone—and he says he could use a body tech, or even just a helper. He says he’d like to grow his staff, if he could find good people, to ease the pressure.

“Profitability is great because everybody is working their tails off,” Teeter says, “but not everybody wants to sprint all day, every day.”

“I think you have to be a hands-on shop owner where you’re billing work, or you have to be that guy who has 100 guys working for him.” —Paul LaRochelle, owner of LaRochelle Auto Body and Repair

He started his business 10 years ago, feeling like he’d plateaued running someone else’s shop. After a couple years of renting a space in Hindsdale, Mass., a community in the far west of the state, he ended up buying a different building for his shop, which had more space than he needed.

“We just decided to add mechanical, people were asking for it,” says LaRochelle, explaining that next came towing, because the local police department wanted someone in town, then came used car sales.

“The collision work is the biggest bread-winner out of the whole business,” he says, pointing out that body work brings in about half of his nearly $1 million annual revenue. “The other things compliment it.”

LaRochelle describes Hindsdale as a semi-rural area—he says there’s a city 20 miles in every direction from there—and that his setting works well for what he does.

“There’s a large customer base in the rural areas,” he says, “and the thing that really works for us is they like to see the face of the people that are working on their car,”

LaRochelle Auto Body’s staff of five is made up of likely familiar faces: LaRochelle and his wife, Colleen LaRochelle, work the office; their 22-year-old son, Steve, works alongside LaRochelle in the shop, and then there’s a full-time mechanic and a full-time tow truck driver.

That number of people, five, is just about right, says LaRochelle, when he’s asked if he’d ever want to grow his staff.

“In this area, [I would not want to be] much bigger than I am right now,” he says. “The numbers seem to work. I had a guy tell me, who I knew from the Boston area, Carl Garcia, he said you have to stay the way you are or have 100 people.”

Having anything in between five or 100 employees, says LaRochelle, “you lose money.” That said, LaRochelle says he would love to bring on another body technician (he says he can end up working 10- or 12-hour days for lack of another tech), though it’s difficult to find people in the area interested in the work.

“The younger generations are not getting into blue collar work,” he says, noting that 22-year-old Steve is one of the youngest people in the area’s collision repair industry.

Another challenge, La Rochelle says, is keeping up with the needed technology for proper repairs—”Equipment is vital nowadays,” he says—because of how little insurance companies pay.

“It’s kind of a sad situation,” says LaRochelle. “All your money is made in your supplements, and if you don’t write good supplements, you’re not going to make it, period—you’ll be gone in your first year.”

Despite the difficulty of investing in equipment, LaRochelle Auto Body is one of the few shops in its area that can repair aluminum.

“It just kind of happened,” says LaRochelle. “I do a lot of fabrication and welding so I was already set up to do aluminum.”

LaRochelle says that in the next five or six years he’d like to be in the shop less than he is now, with Steve eventually taking it over.

At the same time, he says, just because of who he is and the nature of the business, “I don’t see myself ever retried.”

“My goal is to double [the business], get more people in here and then I can just step back and just be a manager and get rid of some of the hats, so we can grow even more.” —Scott Flom, manager of Anderson & Koch Collision

Scott Flom, manager of Anderson & Koch Collision, has a mandate.

“They hired me because they wanted to grow their body shop business,” he says, referencing the owner of Anderson & Koch Ford, a dealership in North Branch, Minn., of which the collision shop is part.

Flom, who came up in Twin Cities area collision repair shops—North Branch is 45 minutes up the interstate from Minneapolis/St. Paul—says that before he showed up, Anderson & Koch Collision was on autopilot.

Since arriving, he says he’s doubled the shop’s business three times and plans to do it again once an addition, which will more than double the shop’s space, is complete. It’s worth noting that Anderson & Koch Collision had $1.2 million in sales for 2019.

Flom says his growth strategy has been based on word of mouth buzz, supported by taking care of customers and doing the work right, “and that’s what we’ve been doing.”

Anderson & Koch Collision is one of a handful of dealership body shops in the state that’s part of the Ford Certified Collision Network, says Flom. He adds that the shop is I-CAR Gold Class and that his three techs are each I-Car Platinum.

“My guys stay here a long time,” Flom says, while also attributing the shop’s growth to joining Key Choice, which happened two or three years ago.

The partnership with 30-50 other shops in the region helps him do a number of things, he says. Shops swap ideas and loan techs to one another when a shop is short-staffed. He also says he switched paint lines to become part of a Key Group with Sherwin-Williams, which saves money, while the paint company also helps him track KPIs.

With even more growth, Flom says he’ll be able to step back as the shop’s backup painter and focus on just being the manager. That has been the trend—he says that when he first landed at Anderson & Koch he was a “working manager,” who painted, wrote estimates, closed, “doing everything.”

Flom says he’s benefitted from hiring experienced people who’d recently relocated to the North Branch area, and also by training up from within, plucking workers from the dealership’s mechanical repair operation. Still, finding the right folks can be difficult; he says it took him six months to find his current painter.

Anderson & Koch Collision can do in-house advanced driver-assistance systems calibrations on Ford vehicles and others, while subletting that type of work on Hondas and certain GMs, Flom says.

Otherwise, the shop can repair all comers.

“We do work on all makes and models, [we’re] the only decent collision center in the area that has the training, experience and tools,” he says.

The shop does all that without participating in any direct repair programs, which Flom characterizes as “not always best for the customer.” He says dealership owner Bill Young understands the need to invest in the future, as well as the technology that comes along with it, and that while the pandemic slowed expansion plans, ultimately, Young went through with them.

“He wants the business to grow and he said, ‘Forget it, we’re going to go forward with the addition, COVID or no COVID,’” Flom says.