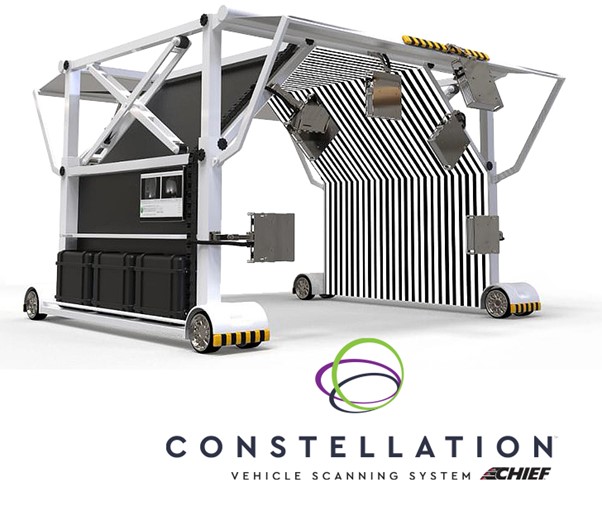 Chief announced Tuesday it would this hail season offer an automated system able to identify and measure vehicle hail dents and produce an estimate to fix them.

The Constellation technology “eliminates the need for an adjuster to manually review the damage,” Chief wrote in a news release, calling it a cheaper and more accurate system than a human adjuster. Chief indicated the technology followed the acquisition of what had been known as Vehicle Hail Scan System.

Bob Finkle, Vehicle Hail Scan System co-developer, said Thursday the technology would be available to customers in time for the typical spring start of hail season.

Constellation resembles a small tunnel and can accommodate vehicles up to about the size of an F-350, according to Finkle, who now works as a brand manager at Chief parent company Vehicle Service Group. It can be deployed to a hail damage site within 24 hours of getting the call by a client, he said.

Finkle said the system counts and measures hail dents using 3-D scanning technology rather than image recognition. Its performance isn’t dependent on a database of vehicle bodies, which Finkle said would be “almost impossible” to stock with every vehicle in operation and keep updated. Instead, it’s able to review any surface with a hail dent, he said. “It doesn’t matter if it’s on a refrigerator,” he said.

“Chief Collision Technology continues to look for ways to bring cutting-edge technology to the automotive industry,” Vehicle Service Group global business development development Vice President said in a statement Tuesday. “The tools and expertise required to repair today’s vehicles properly is quickly advancing. Constellation will allow us to grow our portfolio of technology products and services and expand into new industries.”

Finkle said a vehicle will receive several minutes of triage prior to activating the Constellation technology, with staff checking for elements like previous unreported damage and broken windows.

After that’s done, the Constellation tech examines the car and produce an estimate of record for “PDR dents” in 2-4 minutes, according to Finkle. The system’s wheelhouse is “PDR that can be repaired,” he said. Some operations like R&Is will also be present on the estimate, he said. “We do calculate that,” he said.

The system could also be used for instances of “combo repair” including both PDR and bodywork, according to Finkle. But the Constellation estimate would only capture the hail PDR, he said. The body shop would need to write up any other necessary labor.

Though Constellation today looks for hail strikes, Finkle said plans exist to eventually examine vehicles with collision damage. “We’re going to be expanding that in the future,” he said.

The technology’s hail estimating accuracy is “well over 85 percent” — but it’s “over 100” when compared to status quo hail estimating, according to Finkle.

Human hail estimates today can rely on imprecise “bucket” estimating, such as declaring a 2-dent surface falls within a range like a “1-to-6 (dent) bucket” he said.

“We’re so much more accurate,” he said.

A hail estimator’s technique today might also proceed along the lines of reviewing a quarter of a hood for hail damage and then multiplying those findings by four, according to Finkle.

Since Constellation actually delivers an exact count, its accuracy by definition is “well over 100” compared to a bucket approach, Finkle said.

The technology also exceeds human performance by tallying all the dents at once. Hail claims can often mean “a lot of supplements,” according to Finkle. An adjuster will count “what he can see” in the field, but bringing the vehicle to a body shop reveals “half of the car was missed,” he said.

Currently, a “tremendous” rate of supplements arose, he said. “That’s the way it is,” he said.

But “you’re not gonna need that supplement” with Constellation, according to Finkle.

Finkle said Chief is certifying PDR providers, starting with National Hail and Dent. If a client wishes, Chief will make these partners available to fix the vehicle using the estimate generated by the Constellation software.

“They guarantee no supplements,” Finkle said of National Hail and Dent. He said the PDR company “tested this and they’re fine with it.”

Chief is currently seeking other PDR companies interested in a similar partnership. It seeks “the very best” and has certain criteria that must be met, he said.

The ability for a customer to request PDR repairs is part of the business model Chief has adopted for Constellation. Rather than selling the unit to a customer outright, Chief will temporarily deploy it to a hail scene.

Finkle estimated that a client would need to be faced with about “over 100-plus” vehicles during a hail event to justify deploying the system. He said Chief would be amenable to smaller clients (for example, two fleets of 60 vehicles) pooling demand and sending their vehicles to a Constellation site.

“With the addition of our hail scanning solution, combined with a complete hail claim management service and certified PDR repair network, we will be able to deliver significant time and cost savings to the industry,” Finkle said in a statement Tuesday. “This innovative technology solution will transform the way dealerships, fleet managers and insurance companies address hail damage claims and the repair process.”

A client can simply pay by the scan for hail estimates, but Chief will offer to augment this with a menu of add-on services, such as making PDR providers available to execute the estimate labor.

Chief will also sell customers the option of a more in-depth estimate than the version generated through automation. As noted above, Constellation’s default estimate capture PDR dents and some relevant labor, such as R&Is. But a customer could also pay to have Chief manually research and include other OEM procedures associated with those R&Is if that’s something an insurer desires, “which hopefully it is,” Finkle said.

The Constellation webpage also mentions “ADAS Diagnostic Scanning.” Asked about this, Finkel explained that this referenced another service Chief offered, not technology incorporated into the Constellation device itself.

PDR can require R&Is of various components, and “that can be a major problem” if sensors are present, Finkle said. Advanced driver assistance system performance might be affected. Chief will offer the ability to perform diagnostic scans and conduct calibrations on-site with the Chief Mosaic system if insurer customers wish — “which they should,” Finkle said.

He said Chief would rely on intelligence like OBD-II scan data and VIN lookups to determine features requiring calibration.

But Finkle observed that if a customer adopted the entire package of Chief options, “we’re gonna disrupt the industry very hard,” he said. A Constellation estimate would then “be zero cost, believe it or not,” Finkle said.

If a customer just wanted the Constellation hail examination, Chief would charge per scan, Finkle said. But if they embraced the entire Chief menu of services, “it can be as low as zero. … That’s a game changer.”

Finkle said to think of the cost under the traditional hailstorm process compared to what Chief offered. An estimator might be on site for a month, generating expenses like travel costs and overtime, he said. Chief can complete at least 10-12 vehicles per hour, he said — 100-120 vehicles in a 10-hour deployment day.

“Constellation’s technology eliminates the need for an adjuster to manually review the damage, thereby reducing expenses and improving the accuracy of estimates,” Chief’s news release states.

The automated Chief hail estimating system Constellation is slated to be ready for the hail season spring 2021. (Provided by Chief Collision Technology)

An example of an output generated by the Chief Constellation hail estimating technology. (Provided by Chief Collision Technology)

An example of an output generated by the Chief Constellation hail estimating technology. (Provided by Chief Collision Technology)

An example of the paintless dent repair reporting Chief will offer. The company’s automated hail estimating system Constellation is slated to be ready for the hail season spring 2021. (Provided by Chief Collision Technology)