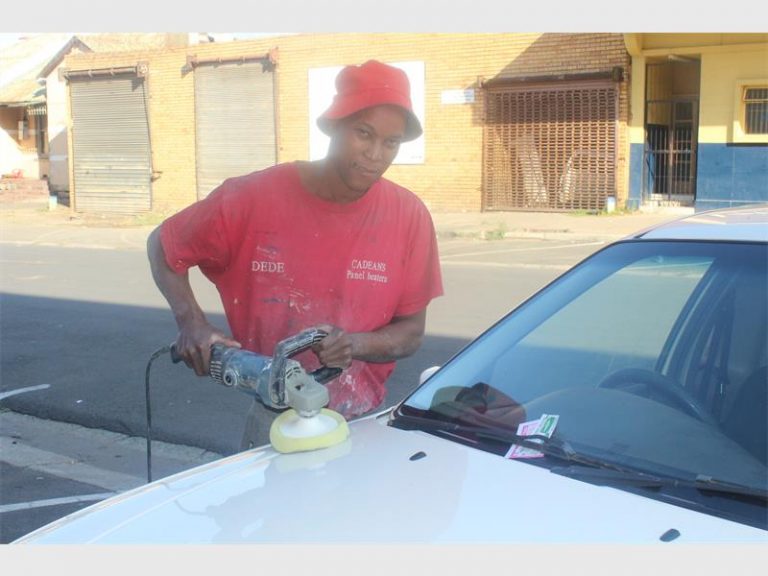 Dede ‘Phineas’ Pholoholo was unsure about his future until he joined Kids Haven and chose to fulfill his dream of becoming an entrepreneur.

He advised upcoming entrepreneurs to remember where they came from and to focus on their goal.

Former Kids Haven resident and now entrepreneur Dede ‘Phineas’ Pholoholo was homeless before finding Kids Haven and deciding to create the future he envisioned for himself.

The panel beater said he joined Kids Haven when he was 19.

“I was a street child and was found by a woman named Aunt Sharlene, who then referred me to Kids Haven,” he said.

“Kids Haven taught me a lot by showing me the way to find myself, from being a no one to being someone.

“I was a teenager with no experience about life, no idea where to go nor what I was supposed to become.”

The 38-year-old added the shelter taught him self-respect and how to appreciate the smallest things in life.

“Kids Haven sheltered and fed a street child, got me a job at a panel beating company called Cranbourne Panel Beaters, which was my first job with no experience whatsoever,” he added.

“I stayed at Kids Haven for three years until they got me my first job.”

After gaining some experience, the Benoni resident decided, at 31 years old, to start his own company.

“I am a small business owner trading in the motor industry of panel beating and spray painting,” he explained.
“My business is based in the CBD and is called Cadeans Panel Beating and Spray Painting.

“I did not study for it, I was trained at my previous employment on practical work. Although I would love to have studied for it, one is never too old to learn about business.

“I get teachings every day to keep up with the changing times and just need to learn to apply it sometimes.”
The businessman told the City Times it was his dream to become his own boss.

“I appreciate Kids Haven for standing by me.”

He advised those who are in shelters not to take it for granted.

“Don’t see them only as a place to eat and sleep, they might just be the organisation that can help you become the next president of the country and only by your willingness to learn, respect and appreciation.”

Phineas explained having a dream is important but making that dream a reality comes with its own set of challenges.

“At any point of starting a business capital is needed, either through funding or donations. You need money to make money, so it’s safe to say money was my biggest challenge and how to handle some difficult clients,” he explained.

“We are all facing the difficulty from the pandemic that shook the entire world and the economy has been badly crushed by this.”

Although Phineas has left Kids Haven, they have not left his side.

“My appreciation goes out to Kids Haven with the funding scheme I get every month when I train the youth that are referred by them,” he explained.

“For the last year they have been there with me through these difficult times and are still with me. I can’t thank them enough for the support they give me.”

He advised upcoming entrepreneurs to remember where they came from and to focus on their goals.

“Never give up on yourself, believe you can be and make a difference,” he concluded.