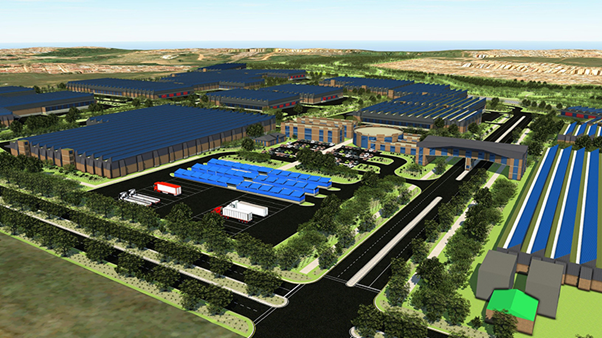 Developed through a joint partnership with Ford Motor Company, the Department of Trade, industry and Competition (DTIC), Gauteng Provincial Government and City of Tshwane, thehub is designed to help SA’s automotive sector better respond to the demands of the fourth industrial revolution and compete with global players.

According to the Gauteng Department of Economic Development (GDED), the first phase of the TASEZ project, which started ground works in August, has so far created hundreds of jobs out of the estimated 8 700 job opportunities that the project is expected to create during the construction. Another 2 100 permanent jobs will be created from the operations of the project.

In a recentTwitter update, the GDED said: “Tremendous progress is being made at the Tshwane Automotive SEZ. The initial R4 billion investment has injected the much-needed jobs and business activity in Mamelodi, Tshwane and Gauteng. Another significant investment will be announced by Ford South Africa next year.”

During his site visit in September, Gauteng premier David Makhura emphasised the need to build an economy that creates more small businesses owned by black people and women, and giving young people opportunities through providing training and entrepreneurial skills so they can set up their own businesses.

“This is the first SEZ that will have 47% SMME participation. These are real businesses and SMMEs from the local townships that will add real value in the construction of this project, and we need to allow them to graduate into the broader industry, including manufacturing and operations.”

The TASEZ also follows a new model for special economic zones in South Africa, as it is the first SEZ in the country to have numerous investors already lined up – the facilities are built to specification for these companies that are already enlisted, and are ready to move in as soon as the construction is completed, Makhura added.

Responding to ITWeb’s request for comment, Ford says national government had invested R3.4 billion in earthworks and implementation of bulk infrastructure. The recent R4.3 billion additional investment has been made by 12 Ford suppliers and related services companies that have committed to establishing operations and job creation.

“Thousands of additional jobs will be added as the TASEZ evolves into a multi-faceted hub designed to bolster the manufacturing capacity and global competitiveness of the South African automotive industry, while contributing to job creation, skills development and the economic upliftment of local communities,” says Ford.

The TASEZ was established as part of the 2035 Automotive Master Development Plan, as set out by the DTIC, with the aim to help the automotive sector become a globally competitive and transformed industry.

It was launched after five years of engagement between Ford Motor Company and government, as the automaker strengthens its futuristic technologies strategy, to help speed vehicle manufacturing and innovation to develop high-performance and fuel economy-focused vehicles.

While the unexpected COVID-19 lockdown delayed the project by several months, and also impacted the disbursement of the initial funds for clearing of the site, Ford says by the first half of 2021, the project will be up and running.

“Ford is confident that most of its suppliers will be able to take occupation of their facilities as planned during the first half of 2021, owing to the commitment of the appointed contractors,” says the automaker.

Article Credit to IT Web.