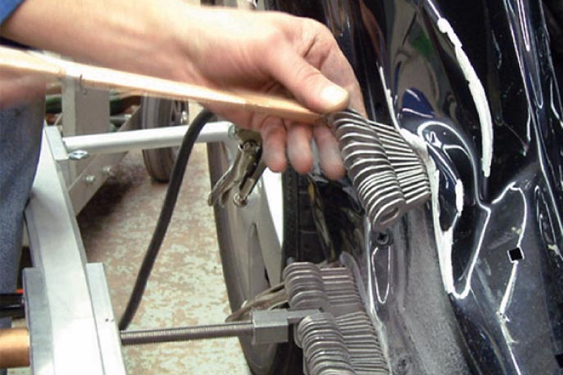 Presented by BETAG’s Dave Flockhart and Axalta’s Patrice Marcil, this latest educational session from CCIF delved into the details of dent repair and provided useful tips and insights that every dent repair technician would want to keep in mind.

The demonstration portion was led by BETAG founder and former race car driver Ralph Meichtry who walked the virtual audience through a number of dent repair scenarios and the best practices repairers should use in those situations.

For example, Meichtry put emphasis on the importance of physically marking the dented area of the vehicle with a pen. He said that this aids the repairer in seeing the type and severity of the damage, emphasizing the distinction between elastic and plastic deformations.

Elastic deformation is when a superficial dent has been made that can fairly easily be popped back out using traditional dent-pulling techniques. However, a plastic deformation involves the material being stressed beyond its yield point and therefore requiring more extensive repair procedures.

This practice of marking the car also helps give customers a clearer picture of the area that is being repaired so repairers can specifically point out what procedure will be used on each part of the dent.

Viewers were encouraged to follow along with the demonstration in a workbook provided by BETAG.