Attention To Battery Among Key SOPs For Programming Vehicles 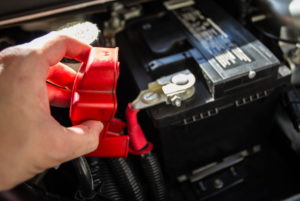 Collision Industry Conference Emerging Technologies Committee member Chuck Olsen reassured repairers last month that programming vehicle systems isn’t difficult for a vehicle who had “been in to it.”

It’s just a manner of properly following the process, Olsen said during a Nov. 10 virtual Collision Industry Conference that presented a set of steps repairers could follow.

“You need to do that every time,” he said. Back in the 1980s and 1990s, it was “very beneficial” for a repairer to memorize what a vehicle needed. But that approach would “really bite you today” given the pace of change in the industry, he said.

The CIC defines programming as “Installing or reinstalling operating software in an ECU or component.”

Think of it like the car equivalent of buying a completely blank computer and installing Windows upon it. You’re installing or reinstalling the software needed to make a vehicle part do what it’s intended to do.

“Programming is not scanning,” Olsen said. They’re different though related operations, he said.

Programming also isn’t the same as coding, which the CIC defines to “Installing configuration data into an ECU or component,” nor is it a synonym for calibration, which is characterized as “Initializing or learning a component to its host system.”

Olsen called “one of the most critical parts” of the programming process the act of inspecting the vehicle battery and main terminals and addressing any loose or corroded connections.

This step, the first on the flowchart of best practices his committee provided, was a ‘very simple thing to do.” It addressed what was “probably the No. 1 thing that makes a program fail,” Olsen said.

Testing and restoring the battery voltage is Step 2. Incorrect voltage will foil the programming attempt, according to Olsen. A low battery may need to be charged and tested, and if a battery is marginal, “it should be replaced,” Olsen said.

Repairers must also connect a “programming capable” battery support set to the voltage referenced in the OEM repair procedures, according to the committee’s flowchart.

Olsen stressed this programming-capable distinction. A battery out of the correct range or “dropping low” can prevent successful programming, he said.

Components such as internal blower motors might activate during programming, according to Olsen, describing this as normal. Battery support which can compensate for such factors and preserve a level voltage is “very important,” he said. (Though he did note that newer vehicles are “a little bit more forgiving” here.)

However, the voltage off older standard battery chargers might fluctuate to the point it impacts programming, he said.

Olsen said a programming failure can lead a repairer to replace a component a second time.

Olsen also advised putting the vehicle in the proper state, such as its door closed and parking brake on, and then leaving it alone until the programming finishes. Some newer vehicles will require the key to be off, as opposed to the old “key on, engine off” format, he said. A vehicle in accessory mode might also defy programming, he said.

Olsen also presented a slide with a “pretty extensive list” of components that either could be affected by programming or need it. Some of these systems might require programming before a repairer can perform a calibration, he said.

Chuck Olsen of AirPro called inspecting the vehicle battery and main terminals and addressing loose or corroded connections as “one of the most critical parts” of the programming process. (FrozenShutter/iStock)

Chuck Olsen (AirPro) of the Collision Industry Conference Emerging Technologies Committee on Nov. 10, 2020, presented this slide of steps associated with programming parts on a vehicle. (Provided by CIC)

Chuck Olsen (AirPro) of the Collision Industry Conference Emerging Technologies Committee on Nov. 10, 2020, presented this slide of vehicle components which might require programming or be affected by it. (Provided by CIC)