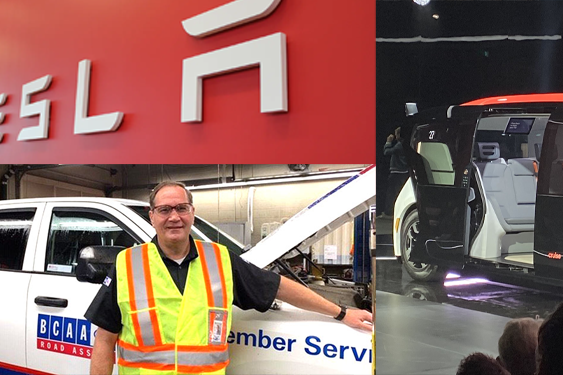 Elon Musk has confirmed that Tesla is going to expand its Full Self-Driving beta software to Canada and Norway.

Tesla has started pushing an early beta (alpha really) of its “Full Self-Driving” software in the U.S., and Musk has said Canada could soon see the software in the EV giant’s vehicles.

“Canada and Norway are next after we get the U.S. out of early beta!” Musk tweeted.

Combined with Navigate on Autopilot, drivers can set a destination, and the car will try to autonomously navigate to the location, but it requires the driver to monitor the driving and be ready to take control at all times.

A mechanic from Maple Ridge, B.C., went on the record this week to share his thoughts on modern mechanics and electric vehicle repairs⁠—much of which can also be applied to Canada’s collision repair sector’s understanding of EV repairs.

Klaus Uebelacker, a former Mercedes-Benz mechanic and current instructor at Kwantlen Polytechnic University’s automotive program claims few trained professionals can open the hood of an EV and understand what they’re getting themselves into. He says it’s a problem that will only get worse if not addressed soon.

“Electric cars are coming fast, and we need to be prepared. The automotive industry, in my mind, is not prepared for it,” said Uebelacker in an interview. “Everybody is scared. Seriously, everybody is scared. They don’t understand the system.”

Uebelacker has completed the British Columbia Institute of Technology (BCIT) EV maintenance training program. He says it’s “the only place” where students are actually hands-on in training on electric vehicle maintenance. He says he would  “absolutely recommend” the EV training for mechanics.

GM believes in building an all-electric vehicle with autonomous capabilities integrated from the beginning, rather than through retrofits, as the most effective way to unlock the potential societal benefits of future self-driving cars that will be available in the years to come.

In January 2020, the Cruise Origin, a shared, all-electric, self-driving vehicle prototype was unveiled by Cruise—the self-driving company majority-owned by GM.

“The immense potential benefits of future self-driving are clear: AVs will not drive distracted or under the influence. And when developed safely, they have the potential to greatly reduce human error on the road,” according to GM’s fact sheet.

The Cruise Origin will be built on General Motors’ all-new new modular architecture, powered by the Ultium battery system.

GM’s Cruise started thinking about technology, not as anyone service, but as a platform. Ridesharing is one use of that platform and has been a focus for the Cruise team. Another focus for Cruise has been delivery.

In San Francisco, Cruise has been testing its fleet of Chevrolet Bolt EV-based AVs. These vehicles are navigating left turns, double-parked cars, six-way intersections, and beyond in a driving environment that is more complex than in suburban areas. In addition to testing on city streets, Cruise is also conducting testing gin Scottsdale Arizona.

Given the potential of all-electric self-driving vehicles to save lives, reshape cities, and cut emissions, the goal of Cruise is to deliver its self-driving services as soon as possible, with safety being the gating metric.