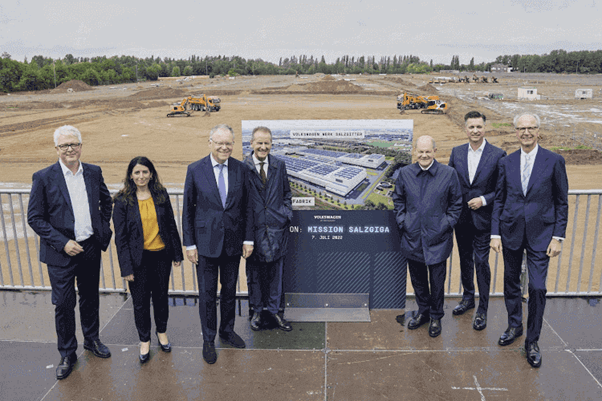 The Salzgitter venture is one of six battery plants VW has planned for Europe. PowerCo, the unit formed to oversee the carmaker’s global battery business, is expected to invest more than €20bn in five factories by 2030, creating roughly 20,000 jobs in Europe, according to a statement.

Automakers from VW to General Motors Co are exploring business models as they race to electrify their lineups and catch Tesla Inc, the world’s top seller of electric vehicles. They’re forging partnerships with battery cell makers and mining companies as they try to secure materials and know-how.

“We hired very seasoned and experienced executives from the battery business,” CEO Diess said in an interview with Bloomberg Television.

“We’re gearing up to become one of the bigger battery-cell producers.”

VW plans to set up a cell plant in Valencia, Spain, may build another facility in eastern Europe close to its assembly plants, and is scouting for potential sites in the US, the CEO said. VW is open to inviting more partners to aid the battery push, he said.

PowerCo will be overseen by the VW executives who have been leading the carmaker’s battery efforts. Frank Blome, head of VW’s battery cell and systems, will be the unit’s CEO, while former Apple Inc executive Soonho Ahn will serve as chief technical officer. The PowerCo team in Salzgitter will oversee activities including procurement, raw materials processing, battery development and management of the planned plants.

VW has indicated it’s open to selling shares in the new business after a period of financing it internally and inviting in strategic partners. CFO Arno Antlitz said last month the unit has been set up in a way to facilitate a potential listing next year or in 2024.

VW’s battery push isn’t without challenges. In the shift to electric cars, manufacturers are facing a complete overhaul of their supply chains with soaring prices for raw materials that threaten to undermine returns.

“Some look with concern at the sheer magnitude of the task that lies ahead: can it all end well  for me, for my family, for my region?” German Chancellor Olaf Scholz said during the event in Salzgitter.

“That’s why I want to tell you it can end well and will end well, under one condition: that we don’t dwell on the past, but rather take the bull by its horns and aggressively accept the challenge of the new.”

Do you think OEMs investing in battery plants make sense from a business point of view? Let us know in the comments below. Also, if you found our content informative, do like it and share it with your friends.