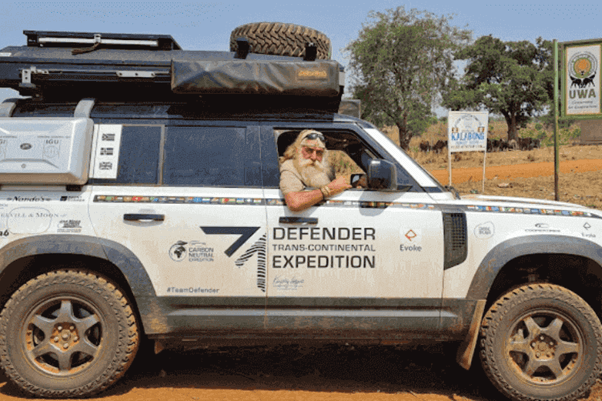 The Land Rover Defender Transcontinental Expedition reaches its halfway point which will cover 30 countries on its route.

Seven months after leaving Cape Agulhas, the Kingsley Holgate Defender Transcontinental Expedition has reached its geographic halfway point in Alexandria, Egypt, becoming the first exploration team in 30 years to cross the African continent from south to north through Sudan.

Travelling in three new Land Rover Defenders, the geographic and humanitarian expedition aims to cover 30 countries on its route from the southern tip of African to the northern-most point of Europe at Nordkapp in Norway’s Arctic Circle, and then through Europe to reach Anglesey in Wales.

The core six-member team is made up of expedition leader Ross Holgate and his wife Anna, Kingsley Holgate and partner Sheelagh, Mike and Fiona Nixon, and assisted by African expedition members in each country who help with local knowledge and language. 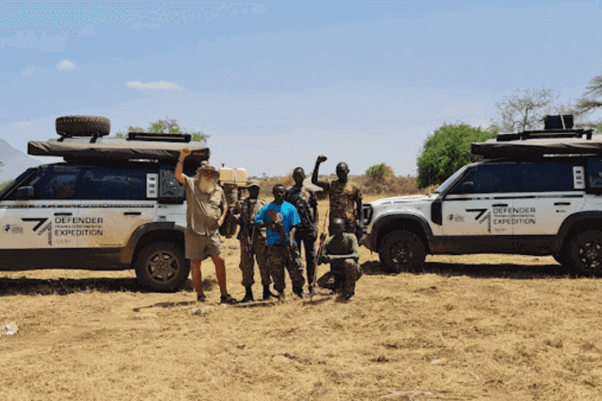 The team has not only dealt with mountains of paperwork related to overland travel in Africa, sharply rising fuel prices and the high costs and logistical challenges of Covid-19 restrictions and PCR tests at every border crossing, but also survived life-threatening situations and extreme hardships on the journey from SA to Egypt.

Four members of the core team became extremely ill with malaria in East Africa as the route through Mozambique, Malawi, Tanzania, Kenya and Uganda coincided with heavy rains and flooding in areas where malaria is rampant.

The disputed, UN-controlled, oil-rich region of Abyei between South Sudan and the Republic of Sudan threw another set of dangerous challenges at the expedition. With the border between the two countries closed, no foreign travellers have attempted this route in 30 years. The expedition’s route through the Bayuda and Nubian deserts of northern Sudan saw daytime temperatures exceed 50ºCs and the team rationing water and fuel to reach Wadi Halfa on the Egyptian border, before continuing onto Cairo, traversing the Western Desert, and ultimately reaching Alexandria on the Mediterranean coast. 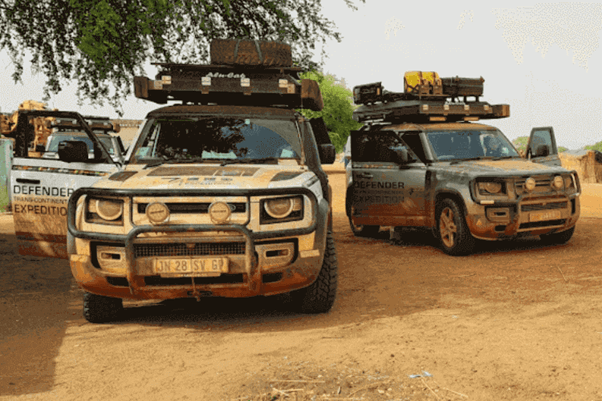 The new Defender models have so far proven to be excellent expedition vehicles. Image: Supplied

Before crossing into Mozambique, the expedition reached the milestone of providing two million meals of nutritional support and early childhood development teaching materials to children at 130 rural creches, upgrading 20 of the most dilapidated, and completed projects to supply thousands of community residents with clean drinking water in water-scarce areas of northern KwaZulu-Natal.

In Mozambique, Malawi, Tanzania, Uganda and South Sudan, the expedition worked with long-term partners Goodbye Malaria and in-country hospitals, churches, schools and community clinics on malaria prevention, providing educational material and distributing tens of thousands of Vestergaard high-quality, insecticide-treated malaria nets to pregnant women and mothers with young children who are the most vulnerable.

Throughout the expedition’s seven-month journey from SA to Egypt, the team also provided eye tests and distributed thousands of pairs of reading glasses to mostly elderly people in remote communities as part of their Mashozi’s Rite to Sight programme.

Ahead lies the shipping of the three battle-hardened Defenders across the Mediterranean to Greece and the second leg of the expedition through Eastern Europe to Nordkapp in Norway’s Arctic Circle. However, Russia’s invasion of Ukraine has thrown a major challenge at the geographic objectives of the expedition’s European chapter. 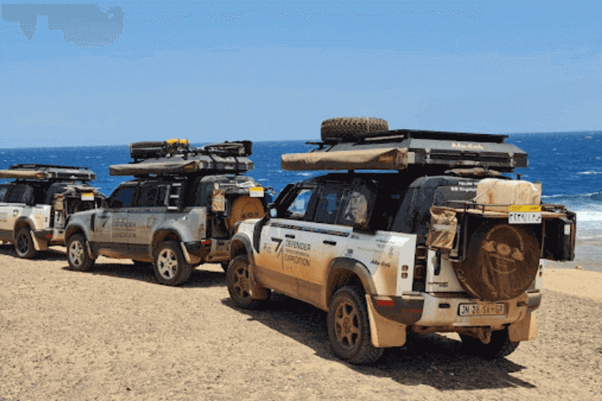 “The ongoing situation in Ukraine is not only deeply upsetting but has forced us to do a complete rethink,” said Ross Holgate.

“Our planned route included both countries. We were so looking forward to exploring Ukraine, reaching the Black Sea, and tackling off-the-beaten tracks to get to Moscow and St Petersburg. Obviously, that’s out of the question but there are still plenty of fascinating Eastern European countries to experience.

“The entire expedition team remains focussed on reaching Nordkapp and finishing this, the first ‘Hot Cape to Cold Cape’ journey in recent years. From there, we’ll traverse Scandinavia and Western Europe, cross the Channel into the UK and end on the Isle of Anglesey in Wales, where 75 years ago, the first Land Rover design was sketched in the sands of Red Wharf Bay by engineer Maurice Wilks in 1947. It will be a world-first expedition, especially for the new Land Rover Defender.”