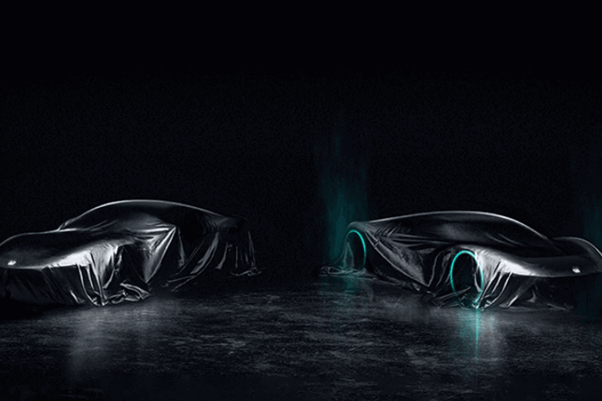 Honda is adding spice to the electric car market with two new EV sports cars as part of their goal to produce some 2 million electric vehicles a year by 2030.

Like every mainstream carmaker that doesn’t want to get left behind, Honda is investing big in electric cars and this latest teaser image implies they won’t all be boring commuters.

Shown during a presentation in which Honda announced that it planned to introduce 30 new electric cars globally by 2030, the teaser shows two sports cars beneath covers and it appears that they are slated for production.

“While taking on challenges toward carbon neutrality and electrification, Honda always has a passion to offer FUN for its customers,” Honda said. “The ‘joy of driving’ will be passed on to our models even in the era of electrification, and Honda will globally introduce two sports models, a specialty and a flagship model, which will embody Honda’s universal sports mindset and distinctive characteristics.”

Although Honda isn’t talking technical stuff yet, it seems evident that the car on the right will be a spiritual successor to the NSX, which is set to bow out this year. Its proportions appear akin to a mid-engined supercar, although being an EV it’s likely that it will have motors mounted on the front and back axle.

The car on the left appears to be an electric equivalent of rear-wheel drive sports tourers like the Nissan 400Z, and Honda might even try to convince us that the spirit of the S2000 lives on in this one although fans of that iconic sports car’s high-revving VTEC engine will no doubt beg to differ.

But times are changing and Honda fans will have to learn to live with the new way of propulsion that will likely become dominant in the next decade.

During the company’s presentation on Tuesday Honda said it plans to spend $64 billion (R931bn) on research and development over the next decade, laying out an ambitious target to roll out 30 electric vehicle models globally by 2030.

Its goals also include producing some 2 million electric vehicles a year by 2030. The strategy marks a push to take ground in the fast-growing market for electric vehicles, where Tesla leads and Japanese carmakers risk falling behind traditional European and US rivals.

Honda and other Japanese carmakers have long said that even as they go electric, they won’t give up on older, hybrid technology. Proponents of hybrids point to the many markets – especially some emerging markets – where infrastructure to support battery electric vehicles will be a long time coming.

“By no means is this the end of hybrids and the replacement of all hybrids with EVs,” Honda Chief Executive Toshihiro Mibe told the presentation. “We will develop our current hybrids and use them as a weapon in our business.”

The bulk of the investment would be in electrification and software technologies. That includes some 43 billion yen of spending on a demonstration line for the production of solid-state batteries, with the aim of starting that in spring 2024.

What is your view of the ever-growing global trend to migrate to electric vehicles? Do you think it is sustainable in South Africa, given our major electrical supply issues? Let us know in the comments below. Also, if you found our content informative, do like it and share it with your friends.