Tracker Warns Of A Change In Hijacking Trends In SA 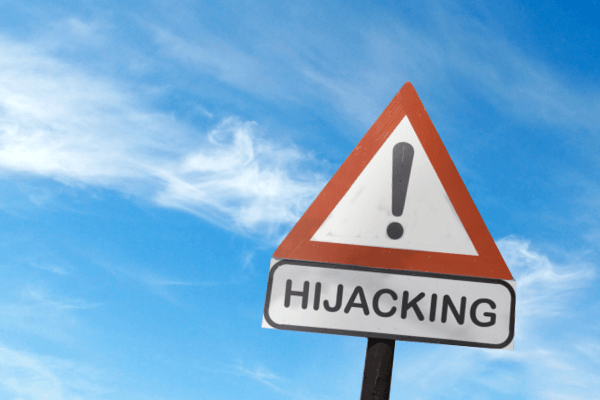 Tracker warns of a change in hijacking trends in SA for the period July to December 2021, with a significant increase in incidents reported.

Hijacking has been on the rise for the past three years, and has overtaken theft as the predominant percentage of vehicle crime activities, the group said.

The slant towards hijacking is most likely an opportunistic tactic, with a noticeable increase in vehicles being targeted for their contents, particularly fast-moving consumable goods. Drivers carrying large amounts of cash are also being targeted, the group said.

Tracker data indicates that a higher proportion of vehicles are reported hijacked on Thursdays followed by Tuesdays, with a higher incidence of hijacking between the hours of 16h00 and 20h00.

However, the percentage difference to other days of the week and time of day is marginal. Gauteng still experiences the most vehicle crime, followed by KwaZulu-Natal and the Western Cape.

However, the Western Cape has the highest incidence of hijacking compared to theft with a 78/22% split. This is followed by Gauteng with a 55/45% split and KwaZulu-Natal with a 53/47% split in favour of hijacking.

Tracker’s efforts to combat vehicle crime resulted in 3,144 vehicle recoveries, 337 arrests and 22 firearms recovered for the six-month period under review. 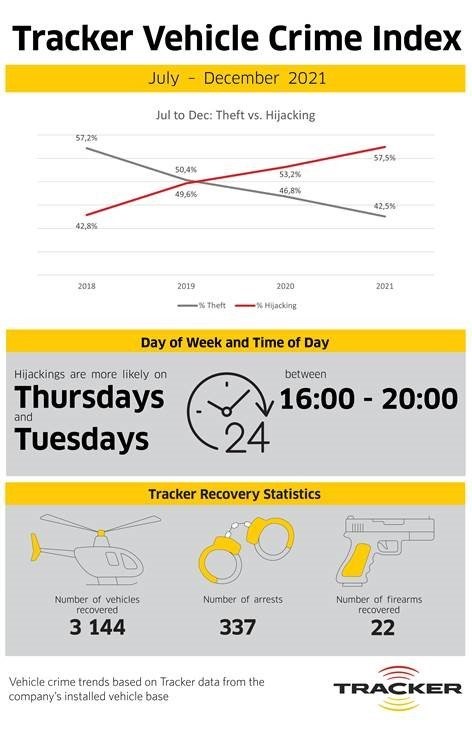 “As our daily lives are getting back to normal, it seems that crime is not,” said Duma Ngcobo, chief operating officer at Tracker.

“These days, it is more difficult to steal a vehicle that is locked, armed and in a secure location, versus one that is out on the road and already operating. We require a collaborative effort between private security and law enforcement agencies to tackle vehicle crime and thus break the backbone of all crime to create a safer South Africa.”

Ngcobo said technology has a curbing effect in terms of managing vehicle crime because it provides an early indicator of the movement of vehicles. “Also, it’s no longer just about stolen vehicle recovery. It’s about what’s in the car, and a vehicle tracker can play an active part in keeping you and your family safe.”

Official crime statistics published by the South African Police Services (SAPS) in February, also pointed to a jump in hijackings in recent months.

A total of 5,455 hijackings were reported across the country over October and December 2021 – a 13.8% increase from the 4,794 hijackings reported over the same period the previous year.

However, annual trends show that hijackings remained largely flat over the three-month period, moving from a high of 1,919 incidents in October 2021 to 1,732 incidents in December 2021.

What is your view of the significant increase in vehicle hijackings over the past three years? Do you think the government and Police is doing enough to actively reduce hijackings on South African roads? Let us know in the comments below. Also, if you found our content informative, do like it and share it with your friends.