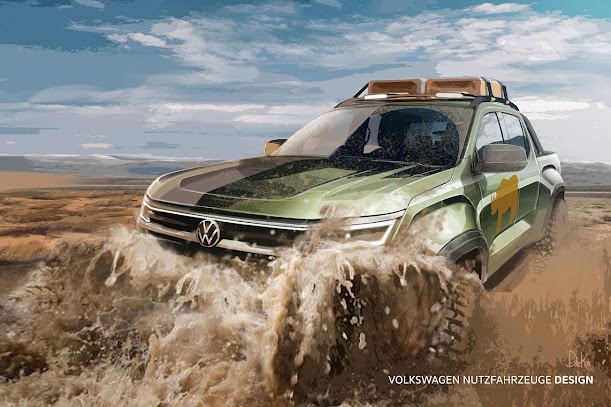 Volkswagen teases its all-new 2022 Amarok through pictures of the next generation bakkie, which will reach global markets next year.

Although it’s well known that the German double cab will share a platform with the recently-revealed new Ranger, it won’t be just a rebadged Ford. VW Commercial Vehicles says the new Amarok has a “clear Volkswagen DNA” with a completely new design inside and out.

The premium pick-up will have significantly more driver assist systems, improved connectivity, innovations that have not been seen before in this segment, and it will still not be deterred by any rough terrain, says VW.

Developed by teams in Australia and Europe, the much-anticipated new Amarok will be produced alongside the new Ranger at Ford’s production plant in Silverton near Pretoria, with a local sales debut planned for late 2022 or early 2023. The current Amarok, which has been with us since 2010, is a full import.

Over the last decade, more than 800,000 Amaroks have been sold globally.

The interior sketch reveals a modern cabin with a tablet-sized centre touch screen and a digital instrument cluster. Picture: SUPPLIED

The interior sketch reveals a modern cabin with a tablet-sized centre touch screen and a digital instrument cluster. Picture: SUPPLIED

VW’s pre-production picture shows the double cab styled with LED headlights and a sculpted bonnet, and though the front bumper is obscured, VW has confirmed the Amarok’s front will have a striking X design.

The Amarok in the picture has pronounced wheel arches, wide gravel-spec tyres and a higher-than-average ride height. This may be the typically exaggerated styling of automotive pre-production sketches, but could it imply that VW is planning a rally-style version of the Amarok akin to the Ranger Raptor? The company isn’t saying.

The interior sketch reveals a modern cabin with a tablet-sized centre touch screen and a digital instrument cluster, in line with Volkswagen’s latest design trend. It also shows supportive seats with well-bolstered sides and a striking dual-tone execution.

VW hasn’t revealed technical details but it’s a safe bet that the powerful 190kW turbo diesel V6 3.0l engine will be retained to power the range-topping Amarok models, while the existing 132kW four-cylinder 2.0l turbo diesel will continue to power the lesser variants.

The current Amarok is offered in a choice of 4×2 and 4×4 versions, with transmissions either six-speed or eight-speed automatics.

What is your view of the new 2022 VW Amarok? If you were in the market, would you consider buying one? Let us know in the comments below. Also, if you found our content informative, do like it and share it with your friends.