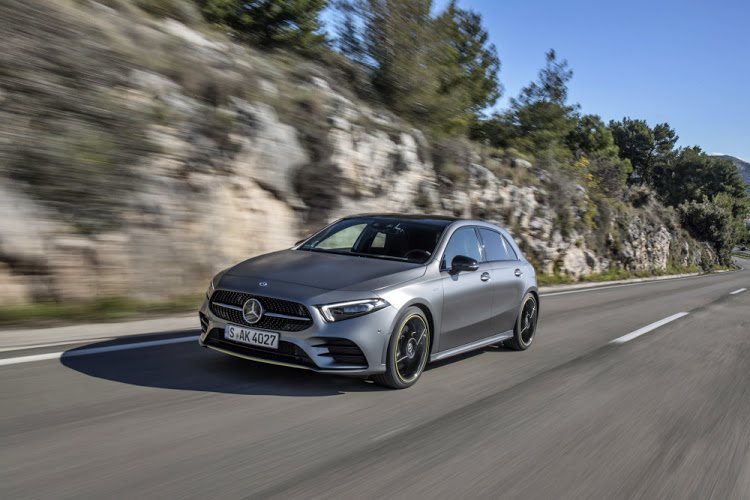 A Mercedes-Benz A Class similar to the one purchased by our reader.
Image: Supplied

Emile Mariemuthu purchased a new A 250 in December 2018 from the Constantia Kloof dealership, part of the Sandown Motors franchise.

“There [were] issues with vibrations on the vehicle since time of purchase,” he said.

On  May 29 2019, the vehicle was taken in to address this concern, which became more pronounced. A broken engine mounting was found to be the culprit. The part was ordered and there was a 21-day waiting period.

On July 1 the owner learned from the dealership that an additional rear mounting would also need replacing and that work was required on the steering rack.

After a lengthy waiting period, his A-Class was ready for collection and all seemed fine. Then his car suffered the misfortune of a collision on August 19: while stationery in a parking lot, another vehicle had driven into the A-Class.

According to Mariemuthu, the damage was cosmetic. “The car was subsequently repaired by Stylish Panel Beaters, which Mercedes-Benz had advised were authorised repairers.”

At its first annual service in December 2019, at about 10,000km, the airbag warning light was found to be illuminated.

This led the dealership to inquire with the owner about previous repairs that may have been carried out on the vehicle, which he responded to by explaining the accident that happened months earlier.

“Mercedes-Benz said the repairers were not authorised and suspended the warranty, which was then reinstated after they realised they had made a mistake.”

“We then spoke to our insurer to assist by taking the car to [Mercedes-Benz] Grand Central Motors, which is outside of the Sandown Motors Group to get a second opinion.

“It was alleged that the airbag was faulty and had not been fitted correctly,” Mariemuthu told us.

A 68-point check also identified a fault in one of the safety-belt mechanisms, parts were ordered and the issue was repaired, with the vehicle collected on January 13 2020.

In February the service indicator light had illuminated. The vehicle was taken in for an inspection and the light had been cleared. A month later the safety-belt light on the instrument cluster became permanently illuminated.

Advice from Mercedes-Benz was that the battery needed to be recharged.

“They suggested that we leave the engine running for about 30 minutes before you drive off or 30 minutes when the car is ready to be parked for the day.

“April and May seemed to have no issues and then three days prior to 29 June the battery light came back on.”

On June 29, the day before Mariemuthu was supposed to take the vehicle in, he was left stranded after a visit to the shops, when the vehicle refused to start. Mercedes-Benz roadside assistance came to his aid and jump-started the car.

So he took the car back to Mercedes-Benz – this time the Rosebank dealership – to have the battery seen to. “They said that they would like to keep the car for a few days to do some tests.”

“Everything seemed fine for about a month, then the engine light came on around early August and there seemed to be a decrease in power.”

Then his problems really began to compound. The A-Class was at the Rosebank dealership for two weeks. The news they came back with was ominous.

“They claimed that the engine wiring was eaten by rats and that the turbo was almost disconnected for some reason that they could not identify.”

In the middle of September, the troublesome safety-belt warning light issue began to rear its head again, but this time it was accompanied by a more damning sign: the engine warning light.

He decided to try another dealership, Mercedes-Benz Sandton. “[I] got the car back after three days and they said that battery was quite low in spite of Mercedes-Benz Rosebank claiming that they charged it fully.”

In November, Mariemuthu noticed a severe drop in power. “The speedometer was reflecting 70km/h, however the car felt like it was going at 30km/h.”

So back it went to Mercedes-Benz Sandton. Their verdict? The engine and exhaust mountings would need replacement. He was given a loan car. Still in their possession, more issues were identified, such as faulty wiring “on the entire vehicle”.

“They then fixed the wiring on the vehicle and when they took it for a test drive they noticed vibrations. They investigated and further found that the engine block has an issue.”

The engine was stripped and piston number two was found to be suffering inadequate compression, which caused a backfire, in turn responsible for the persistent vibrations. The seal around piston two appeared to be damaged, according to Mariemuthu.

As it stands, his vehicle remains with the dealership as it awaits a replacement piston and piston head. “I was told that I would get the vehicle back this week,” he said in a conversation on January 25.

A frustrated Mariemuthu has lodged a complaint with the Motor Industry Ombudsman of South Africa (Miosa).

We reached out to Mercedes-Benz South Africa for comment. Spokesperson Lebohang Matsoso said: “Legal had advised that the matter is with Miosa and we will wait to hear what the finding is.”