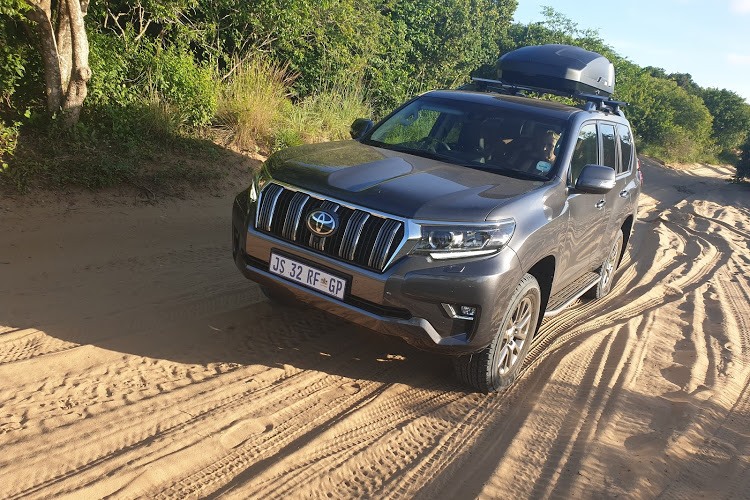 With more power and updated tech, the seven-seater SUV is a top choice for family expeditions.

In Mozambique’s Ponta Malongane, it seemed that about seven out of 10 vehicles were Toyota 4x4s when we went there for the December holidays. Hiluxes, Land Cruiser 200s and Prados were omnipresent on the sandy roads of this coastal holiday spot and we fitted right in with the Prado 2.8 diesel VX-L.

The final stretch to Ponta Malongane is a 7km undulating trail of soft sand which requires a 4×4, or at least an expertly driven 4×2 with a diff lock. Even four-wheel drives get stuck there sometimes but thankfully this Toyota never required me to dig it out of trouble in the 33ºC heat.

The seven-seater Land Cruiser Prado has a black belt in off-roading, and with its full-time all-wheel drive and tall ground clearance the vehicle churned through the soft turf with an easy swagger, even though the rear diff lock wasn’t working in the test car.

We left the Prado in its default 4H mode and didn’t need to switch to low range or the centre diff lock for the conditions, but this rugged body-on-frame SUV has modes for Africa. Covering just about every off-roading eventuality is a Multi-Terrain Select system that offers five pre-configured modes (mud & sand, loose rock, mogul, rock & dirt, and rock), Downhill Assist Control (DAC), and Crawl Control.

The rear suspension can also be raised for better ground clearance at the press of a button.

New for 2021 is a Drive Mode Select which offers five driver-selectable modes: Comfort, Sport, Sport +, Normal and Eco. It’s part of a raft of upgrades to the Prado range which includes a power boost and some technical updates.

Like the recently updated Hilux and Fortuner, the 2.8l GD-6 turbo diesel Prado gets a steroid boost to 150kW and 500Nm — burly increases of 20kW and 50Nm.

You can now also strap a bigger caravan or boat to the optional tow bar, as the maximum braked towing capacity in the 2.8 models has been raised to 3,000kg.

The up-powered engine feels strong and it had no trouble schlepping six people and all our luggage on the holiday sojourn. Despite the heavy load it cruised with little effort and had decent overtaking acceleration, even though the initial pull-off is a little languid at high altitude.

The Prado has a plush ride that munches miles in comfort. Its bulk and high ground clearance preclude it from any cornering heroics, but Adaptive Variable Suspension (AVS) stiffens the shock absorbers in the sportier Drive Modes to make it feel less soggy.

The low-revving engine averaged an impressive 10.3l/100km, adding great economy to its list of talents. With a 150l fuel capacity the vehicle is capable of over 1,400km between refills, a useful feature when exploring remoter regions of the planet.

A new-generation multimedia system is fitted across the range, and incorporates a larger nine-inch touchscreen display, enhanced voice recognition and compatibility with Apple Carplay and Android Auto.

There’s only one USB port but a number of 12v sockets provide capability for charging phones or camping accessories.

In terms of cabin design the 11-year old Prado keeps things old school. In contrast with the digital-intensive interiors that are de rigueur, this Toyota still has a large number of buttons scattered across the dash. It looks a bit messy but the functionality is good as you don’t have to hunt for items in a digital labyrinth.

The navigation system is a mixed bag and it’s not as user friendly as using Google Maps. On our Mozambique jaunt it tried to direct us from the main road onto every goat path, and the map needs updating. But I do like the “breadcrumbs” feature which allows you to retrace the vehicle’s route and find your way back home in uncharted off-road territory.

The Prado’s a huge vehicle and isn’t much fun in parking lots, but it has an impressively tight turning circle, and a camera system with a bird’s-eye view helps guide the behemoth into tight spaces.

Life aboard good ship Prado is a happy place for long-distance travels. There’s space for seven adults inside the huge vehicle, and though passengers in the back row have the least leg room, their life can be made comfier by moving the middle-row seats forward or tipping their backrests more upright.

All three rows of seats have their own air vents, and the aircon did a sterling job of heating the large cabin in the humid coastal conditions. There’s a fridge between the front seats to keep drinks cool, and in the range-topping Prado VX-L model the front two rows of seats can be heated or cooled.

A shape-shifting interior allows the third row seats to electronically fold up or down at the press of a button. With up to five people aboard there’s plenty of luggage room, but with the rearmost seats up there’s just a sliver of cargo space for thin items like camping chairs. With our tally of six, we had to use a Thule roof box to accommodate most of our gear.

In an SUV market segment proliferated by ever more crossovers and softroaders, the Prado remains a true explorer, a swashbuckling example of all-terrain mastery. It eats harsh terrain for breakfast but lays on all the luxuries, and you’ll struggle to find a better family adventure vehicle.

The roof box was part of the Thule Force XT range which is available in various sizes from 300l to 500l.

The box on review was the medium-sized 400l version priced at R13,999, which proved spacious enough to fit the luggage of six people for a 10-day trip.

It’s quick and easy to mount thanks to a PowerClick quick-mount system, with a torque indicator that clicks when it’s properly secured.

The lockable Thule Force XT conveniently opens on both sides to provide access to all areas of the box from either side of the vehicle.

The box is sturdy but light enough to be carried by one or two people. It’s quiet too, with an aerodynamic design ensuring it generates no major wind noise when driving.

Only one USB port