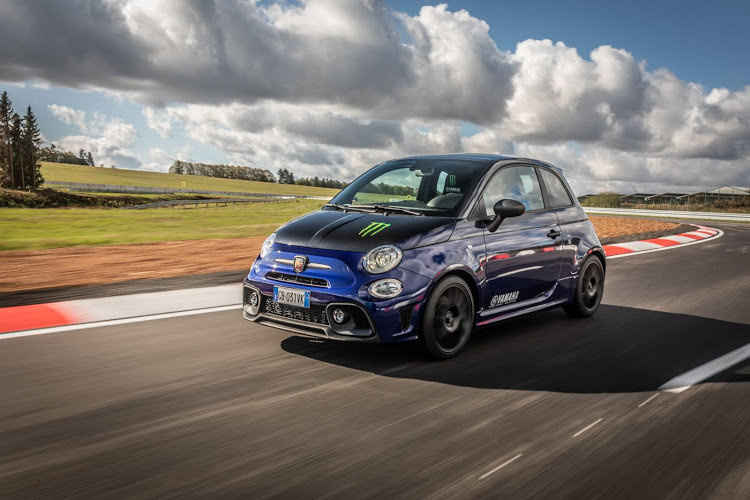 The tumult of Covid-19 continues to brew in the background as we go about finding semblances of normality in our daily lives. With trepidation and optimism, we hold a collective hope that 2021 will bring better things.

Although the automotive industry will not revert to pre-pandemic levels of activity overnight, there are developments to look forward to, like an onslaught of new metal.

We virtually asked all the players in the sphere about what could be expected from their respective stables. Some had more to say than others.

The 595 Scorpioneoro is yet another feisty rendition of the beloved Fiat Nuovo Cinquecento. Production is limited to 2,000 units. The vehicle packs a 121kW/230Nm punch from its 1.4-litre T-Jet engine. Joining the limited run model is the 595 Monster Energy Yamaha Edition (above), replete with a giant Monster emblem on its hood.

The Giulia and Stelvio – which more people ought to consider – will both be treated to facelifts.

Power is high on the agenda for the Ingolstadt-based brand this year as it unleashes a slew of new RS-badged offerings. These includes the updated RS4 Avant, RS5 (coupé and Sportback); RSQ8 (and SQ8); RS6 Avant and RSQ3. It gets even better because the enhanced R8 is also anticipated, in addition to the S8. There are also plans for the more down-to-earth members of the family. Expect revisions for the Q2 and Q5, plus the all-new A3 and S3. A Sportback version of the Q5 is also on the cards.

You might have seen images of the latest M3 and M4 on SA shores  being trucked to dealerships. The duo will be launched officially in the first quarter. In the same period, the enhanced 5-Series and M5 join the range. The 128ti is poised to arrive too, as well as the convertible 4-Series. Lastly, the electric iX3 will set a greener agenda for BMW in the last quarter.

The plucky C3 is destined for a facelift.

No plans for the Japanese peddler of not-so-safe compacts.

Add some glamour to your life with the refreshed Portofino M, which stands for “modificata” and has no kinship to a certain German brand. Its 3.9-litre V8 gains more power and promises meaner acoustics.

Updates are on the cards for the long-standing 500, including the 500X. The underrated Tipo (hatchback and sedan) will be refreshed for 2021.

Local custodians of the blue oval brand said they have decided against communicating details of forthcoming new models ahead of launch.

The firm said it would be releasing three new platform sport-utility vehicles this year. No detail was mentioned as to which models would be wearing the GWM moniker and which would go under the guise of the more upmarket Haval title.

New products are on the horizon, confirmed the company, opting to keep mum on the specifics.

The grown-up, latest generation i20 is in the pipeline, as well as the sharper-looking new Tucson. A facelift will be given to the i30N, which also gains a dual-clutch automatic transmission. Lastly, the South Korean marque will eye a premium space with its Palisade sport-utility vehicle.

No major product introductions planned. We are likely to wait until 2022 for the new D-Max and MU-X.

Plug-in hybrid derivatives will be added to the E-Pace and F-Pace ranges. A more powerful diesel choice joins the XF line-up. The I-Pace will have improved charging capabilities.

Expect updates across the range in 2021  as the famed off-roading brand welcomes a new Renegade, Compass, Cherokee and revised Wrangler. Plus, the ageing current Grand Cherokee is destined for replacement.

A relaunch for the brand – including its interesting new logo – will be supplemented by minor tweaks for the Picanto  plus the release of the all-new Sorento and Grand Sedona.

A small allocation of the Huracán STO arrives, billed as a race car in road legal configuration.

Brace for the extensively reworked IS, new LS and topless version of the striking LC two-door.

You read right: the heritage-steeped, purist sports car company is returning to SA. The product offensive is yet to be confirmed, but new importers Daytona said customers can expect an exciting comeback.

The new Thar promises greater comfort, but not at the expense of off-road prowess. Our market could potentially receive new replacements for the XUV500 and Scorpio. Automatic transmission convenience is likely to be included in more derivatives of the Pik Up.

A hybrid version joins the Ghibli range, followed by the more potent Trofeo version. The Quattroporte Trofeo arrives too. These models wield the same 3.8-litre, Ferrari-sourced V8 featured in the Levante Trofeo.

Having already launched the CX-5 Carbon Edition, the brand will follow up with the attractive CX-30 in February. The all-new BT-50 arrives in the second half of 2021.

Expect the new S-Class, facelifted E-Class family and introduction of the electric EQ range. On the Mercedes-AMG front, there will be a Black Series version of the GT, in addition to the GLE 53 and 63 S, as well as the GLS 63.

The Xpander will take the fight to established budget-orientated seven-seaters. The brand said a reintroduction of the Mirage was being investigated.

The new, locally-produced Navara will spearhead the Nissan offensive this year. It will be joined by the Magnite and Terra sport-utility vehicle.

Finally, the new Opel Corsa will go on sale, as well as the new Crossland and Grandland.

An all-new 208 could revive the brand’s B-segment hopes. Meanwhile, the 3008 and 5008 get facelifted. Good news for pick-up fans: the LandTrek looks like a sure thing for SA.

Aside from the recently launched 25th anniversary Boxster and updated Panamera, Porsche may give us a new 911 GT3 and a PDK option for the 718 Cayman GT4.

The all-new, fifth-generation Clio is an important product for the French automaker. We may see the launch of the new Kiger compact sport-utility vehicle too. The new Captur is planned for the fourth quarter, while the Duster Oroch single cab is under consideration for 2022.

The Vitara Brezza aims to bolster the brand’s presence in the affordable end of the sport-utility vehicle category. The popular Swift will be treated to a minor change.

Fans are undoubtedly waiting with bated breath at the prospect of driving the new GR Yaris. It will arrive in the middle of the year, as will the Land Cruiser 300. Hybrid options will be added to the Corolla and RAV4 ranges. The new GR86 is expected in the third quarter. Coming up soon is the Urban Cruiser, as well as specification changes for the C-HR.

It is a big year for the company as it gears up to celebrate 70 years in SA. Product highlights include the Golf 8 GTI and R, Tiguan facelift, Caddy 5 and T6.1 Kombi.

The Swedish brand said it has exciting works in the pipeline, but declined to say more.