Pedestrians Are The Biggest Contributors To Road Fatalities 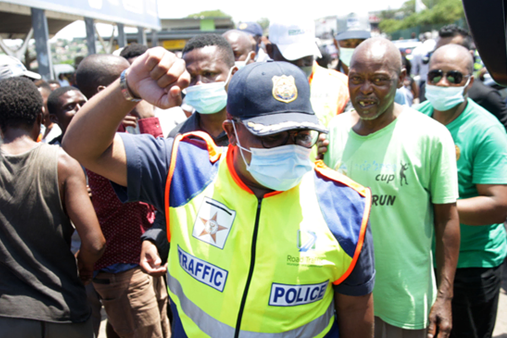 South Africa – Durban – 20 December 2020 – Transport Minister Fikile Mbalula took The Hoot For Life Arrive Alive road safety campaign to KwaMashu and Umlazi where he was accompanied by MEC Bheki Ntuli, Mayor Mxolisi Kaunda as well as Premier Sihle Zikalala where they encouraged people not to drink and walk and to adhere to the rules of the road. PICTURE :Bongani Mbatha /African News Agency (ANA)

He was speaking in KwaMashu yesterday during the road safety campaign “Hoot For Life Arrive Alive” where he said the biggest contributors to road fatalities annually were pedestrians.

“That’s why we are in the township today because we tend to ignore people here and they cross the road illegally and do what they do, getting themselves into trouble and people die. We have encouraged people not to drive at night as most of the accidents happen at night. Others drive at night drinking, thinking there is no law enforcement. There’s going to be law enforcement 24/7 as well as roadblocks to deal with those who are unlawful.”

Mbalula added that there would also be operations to prevent corruption in terms of bribery.

According to Premier Sihle Zikalala, from December 1 to 18 a total of 14 589 vehicles were stopped and inspected by KZN traffic officers.

“As a result, a total of 56 vehicles were suspended 130 unlicensed vehicles were discovered. In terms of fatalities, since December 1 to 19, the province has recorded 130 fatalities. This is lower than the 159 fatalities recorded during the same period last year,“ said Zikalala.

The alleged drunk driver, Sipho Ntuli, was involved in a multiple vehicle crash that claimed nine lives in Jozini in June and is due back in court next month.

He was denied bail in the Ubombo Magistrate’s Court earlier this month where the matter was adjourned to the Ngwavuma Regional Court for a pre-trial conference.

Ntuli said after this accident, they became concerned and then assigned the Community Safety legal team to monitor the court case.

“We are very happy that he is still behind bars after being denied bail. This is a very strong message to anyone who decides to drive a truck or any vehicle drunk.”

Mayor Mxolisi Kaunda said it was important that as the city received visitors, they adhered to all the road rules.

“Road safety is our collective responsibility,” he said.

Durban Metro Police Deputy Commissioner Sibonelo Mchunu urged road users to obey the rules of the road and to adhere to the speed limit, particularly during these holidays.

Mchunu said they recently launched a fusion centre that has linked their vehicles together with all traffic management taking place.