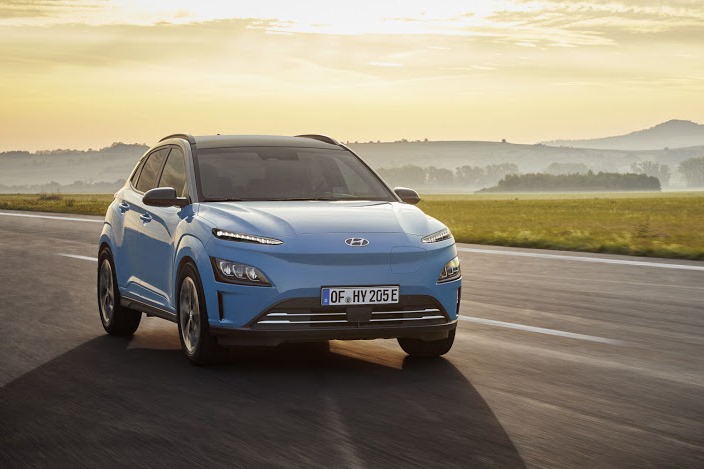 Hyundai has recalled more than 74,000 Kona EVs, its top-selling electric car, after 16 of them caught fire in South Korea, Canada and Europe in two years.
Image: Supplied

Hyundai Motor Co is being sued over a string of battery fires in its electric vehicles (EVs), just as General Motors Co recalls nearly 70,000 EVs with batteries from the same maker, LG Chem Ltd.

The owner of a Hyundai Kona EV, a South Korean civil servant who asked to be identified only by his surname Kim, is among around 200 people who lodged a class action lawsuit against Hyundai last week, seeking compensation for what they say is the reduced value of their EVs and other losses, Kim and two lawyers representing them told Reuters.

The court filing is not a public record.

Kim had initiated a petition drive to sue the Seoul-based car maker after the same brand of EV caught fire in his neighbourhood, forcing about 20 residents to evacuate their homes.

One of the lawyers said they were initially seeking 8m won (roughly R110,821) per plaintiff, but they could increase the demand as the trial proceeds.

The plaintiffs want Hyundai to replace the entire battery pack – the most expensive part of the vehicle – of their Kona EVs, not just update the software, as the company’s recall provides.

EV sales are climbing globally as the technology holds out the promise of cleaner transportation, with costs falling and driving ranges increasing. But the emerging risk of fire from overheated batteries could set back the entire industry.

Recalls could mean reputational as well as financial damage to Hyundai and other car makers, which are pushing into the EV market to meet tougher emissions regulations and to challenge market leader Tesla Inc. The problems could also dent consumer demand for EVs.

“A battery that is not safe is like a bomb,” said Park Chul-wan, a South Korean battery expert.

A series of fires involving car makers, including GM, BMW and Ford Motor Co, expose the challenge the industry faces in managing the risks of new technology and the pressures to boost battery production and performance.

GM said on Friday it was recalling 68,677 EVs with LG Chem batteries after five reported fires and two minor injuries. Hyundai has recalled globally more than 74,000 Kona EVs, its top-selling electric car, after 16 of them caught fire in South Korea, Canada and Europe in two years.

South Korea’s safety agency is investigating the cause of the Kona fire, and depending on the results, Hyundai and LG Chem could face costs up to $540 million (roughly R8,311,896,000) if they have to replace all the affected batteries, analysts reckon.

In a statement to Reuters, Hyundai said the cause of fire is unclear, but it suspects internal damage to batteries may be to blame, adding that it is investigating the case with its supplier and the transport ministry.

Hyundai said it is not considering setting aside money for recalls as it expects its software fix will be able to prevent fires by detecting problems.

“We are constantly monitoring the situation after an update of the (battery management system) and we will continue to try to minimise consumer inconveniences going forward,” Hyundai said, adding that problems were found only in some vehicles, which would get battery replacements at no cost.

While GM investigate the root cause of the fire, GM advised Bolt EV owners to change the charge settings on their vehicles, limiting charges to 90% to reduce the risk of fire.

A LG Chem spokesman said, “We will cooperate with Hyundai Motor and General Motors and sincerely proceed with an investigation to identify the exact cause of the fire”.

LG Chem CEO Hak Cheol Shin told Reuters last month that the battery system is very complex, suggesting problems may be caused by other components made by Hyundai’s suppliers.

“As a supplier of a key component of the battery system, we clearly feel responsibility. But until a clear cause would be determined, we can’t come up with measures to address the problems,” he said.

In addition to the problems at Hyundai and GM, Ford recently offered to replace the battery packs of its Kuga plug-in hybrid vehicle over fire risks, saying this could cost the carmaker $600m (roughly R9,234,870,000) in the second half, including a cost to meet Europe’s emissions regulations.

Ford and BMW have recalled vehicles using Samsung SDI Co batteries, citing cell manufacturing defects. A Samsung SDI spokesman said investigations are underway into the cause of the fires.

Tesla was investigated by a US safety authorities over a battery software upgrade of some vehicles following vehicle fires.

Hyundai and LG Chem are at odds over the root cause of the fires as South Korea’s safety agency investigates the case. LG denies the battery cells are defective.

The plaintiffs are pressing Hyundai to take more decisive action.

“While acknowledging flaws in the batteries, your company has been relying on the wrong policy – software replacement, which is only a temporary fix – to buy time,” they said in a letter to the carmaker  seen by Reuters.

A 35-year-old woman, who asked to be identified only by her surname Shin, said she had to evacuate her apartment complex at dawn with her baby in a stroller last month after a Kona EV caught fire and engulfed the underground lot in flames.

“The stench of burned electronics and smoke swept through the whole neighbourhood,” Shin told Reuters.

Before the fire, she believed EVs were good for the environment. Now, she says, she tells her relatives not to buy them.

“Electric vehicles have become something I’m so scared of.”