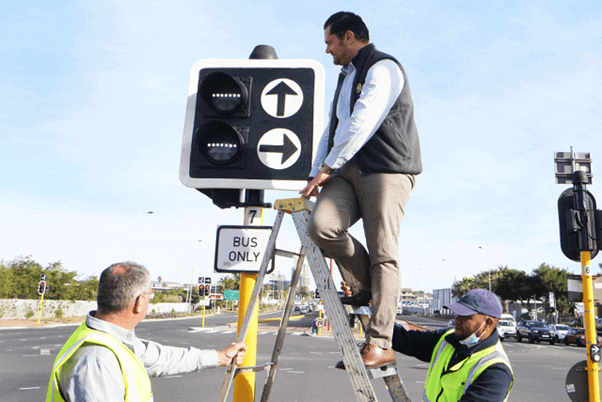 Cape Town is getting new traffic lights that will hopefully reduce confusion amongst motorist, with future plans to roll them out to the rest of South Africa.

The City of Cape Town has announced a new traffic signal system pilot programme which will be tested at key intersections over the next six months.

The signals are specifically designed for the city’s public transport system and aim to end confusion among motorists at these intersections, which up until now served both private vehicles and MyCiTi buses.

Examples of existing bus and light rail signals from across the world were considered in deciding on the alternative bus signal proposal. The preferred system is a white single aspect light system, used in the United Kingdom and some European countries, combined with a new directional information sign to clearly identify applicable bus movements where necessary.

The city noted that the new traffic signals are aligned with international best practices and are being tested in consultation with the National Department of Transport over the next six months.

If successful, these signals will be implemented across the MyCiTi system and be included in the South African Road Traffic Signs Manual for use by other cities and transport systems in South Africa, it said.

“The road safety of all road users is of great priority to the city, so my hope is that this new traffic signal system will cause less confusion and incidents among motorists in the area,” said mayor Geordin Hill-Lewis.

“All motorists, pedestrians and other road users must continue to follow the rules of the road and the ordinary traffic signals that apply to them. I believe this pilot project will be a success and that this new traffic signal system will prove to work just as efficiently in Cape Town as it currently does in other European cities,” said the city’s mayoral committee member for urban mobility Rob Quintas.

What is your view of the new traffic signals that are specifically designed for the city’s public transport system? Do you think it will reduce confusion amongst motorists? Let us know in the comments below. Also, if you found our content informative, do like it and share it with your friends.