The Cars Most Likely To Be Involved In Accidents In SA 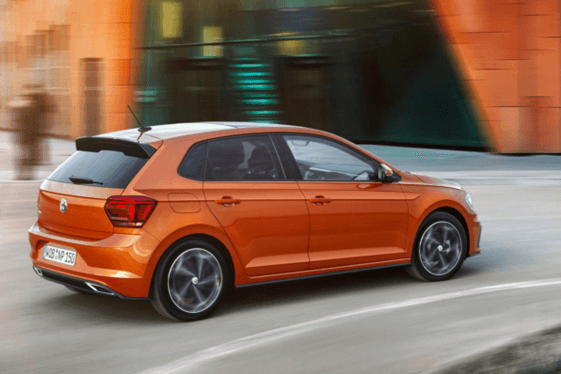 The cars most likely to be involved in accidents in SA are detailed in a new report from the Road Traffic Management Corporation (RTMC), and include vehicle models such as the Volkswagen Polo, Toyota Hilux and Toyota Quantum.

The RTMC said these models also accounted for as much as 35% of speeding-related infringements. It must be noted that all three vehicles are among the most popular on the road, with the former a bestselling vehicle for more than a decade, while the latter two models are used as public transport vehicles by more than 10 million commuters daily.

The RTMC, an Agency of the Department of Transport (DoT), said the aim of the report is to provide input to road safety programmes regarding the ‘type of vehicle’ which is involved in fatal crashes. 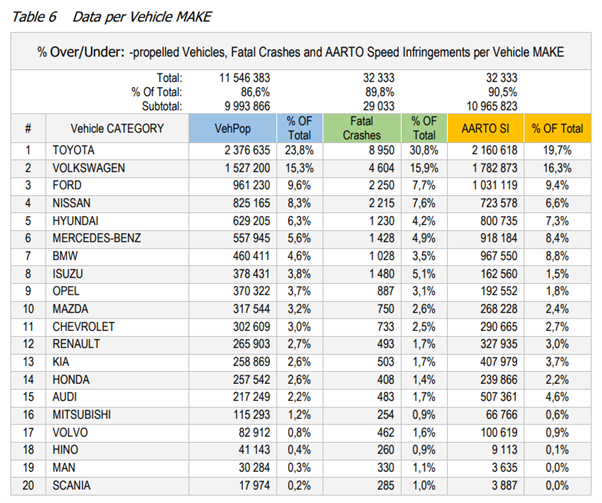 These two vehicle makes also accounted for by far the most speeding infringements, making up 36% of all SIs issued from 1 January 2019 to 30 June 2021.

“Even though not acceptable, considering that Toyota Quantum and Toyota Hiace vehicles are on road on a semi-full-time basis and travel more million vehicle kilometres vs other vehicle models and would thus be exposed to more on-road conflict situations and/or to driver fatigue, one could expect more fatal crashes for this type of classes,” said the RTMC.

“The high SIs for especially public transport type vehicles such as for Toyota Quantum and Toyota Hiace models is, however, unacceptable and needs to be addressed,” it said. 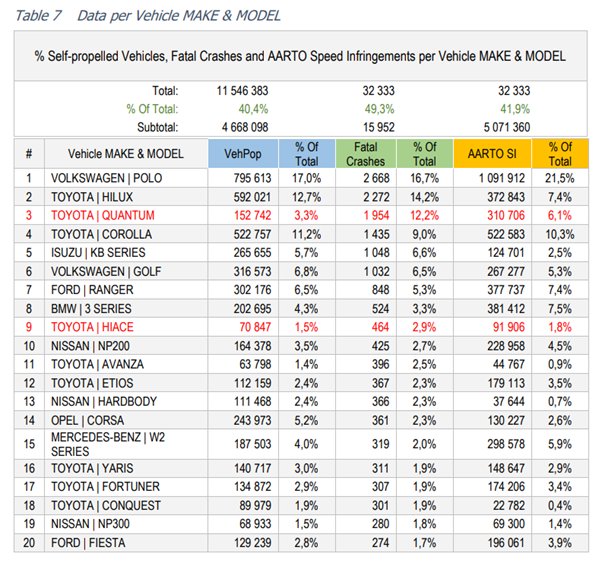 A visual illustration of the over/under-representation for each of the vehicle makes and models for fatal crashes and SIs vs total vehicle population shows that the Toyota Quantum vehicles are overrepresented by 9% on SIs and by 2.9% for all fatal crashes vs TVP, which the report notes are a cause for serious concern.

The number of Volkswagen Polo vehicles involved in fatal crashes are within 1.0% of the TVP but are overrepresented by 4.5% for SIs vs TVP.

“The rationale for the over/under-representation needs to be further analysed per province/metro to provide better intelligence,” said the RTMC. “More concentrated traffic law enforcement or speed over distance enforcement could address overrepresentation in SIs,” it said. 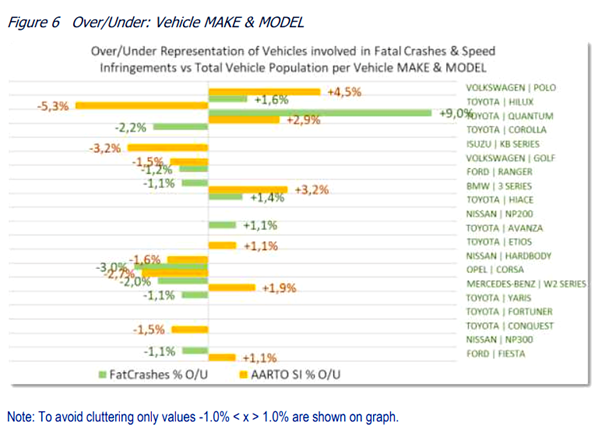 What is your view of the new report detailing the most likely vehicles to be involved with accidents in SA? Do you think this report will have any positive impact on road safety and fatalities? Let us know in the comments below. Also, if you found our content informative, do like it and share it with your friends.