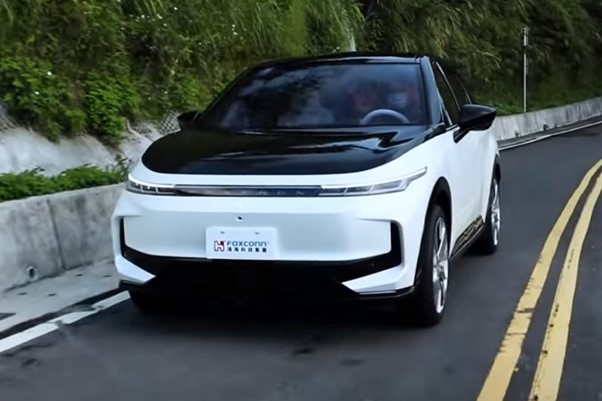 The SUV and sedan models introduced on Monday are concept vehicles that the manufacturer plans to build for automotive customers rather than sell under its own brand. Executives including Young Liu, chairman of Foxconn’s flagship unit Hon Hai Precision Industry Co., unveiled the vehicles at the company’s Technology Day event in Taipei.

Foxconn is the largest assembler of iPhones, giving it an edge as a potential carmaker partner for Apple as the U.S. company weighs expanding into vehicles. As part of its aggressive push into cars, Foxconn agreed in late September to spend $280 million on the purchase of an auto plant in Ohio from embattled startup Lordstown Motors Corp.

“We are no longer the new kid in town,” Liu said. “We have gradually built an EV supply chain and showcased our EV hardware.”

Taiwan’s Yulon Motor Co. will be Foxconn’s first electric-car customer, Lilian Chen, Yulon’s chairwoman, said at the Taipei event. Foxconn also displayed its electric bus, which is set to be delivered to a local transportation provider next year.

Foxconn is among the technology companies targeting EVs as a source of growth beyond low-margin electronics assembly. The Ohio plant deal is a boon for Foxconn, giving it assembly capacity, equipment and talent, Citigroup analyst Carrie Liu wrote in a recent note.

The Apple car would be the ultimate prize for every aspiring EV manufacturer. Working in Foxconn’s favor is its strong relationship with the U.S. consumer-electronics giant. The years-long partnership has expanded as Apple has added product categories, and the company now accounts for about 50% of Foxconn’s annual sales.

Any Apple automobile is still years away and the company has suffered setbacks including the recent departure of the head of its car project to Ford Motor Co. An Apple car has for years been somewhat of a paradox — it’s one of its most hotly anticipated products yet the company has publicly said almost nothing about it.

Foxconn has yet to start sales of any vehicle following the debut of its EV platform last year. It plans to start mass production of Lordstown’s Endurance electric pickup in Ohio in April, according to a person familiar with its schedule.

In comparison, carmakers such as Tesla Inc., Volkswagen AG and Hyundai Motor Co. are already churning out EV models and spending billions of dollars on product development and capacity.

Still, Foxconn has made some progress. It has a manufacturing deal with Fisker Inc. and a partnership with Thailand’s state-owned conglomerate PTT Pcl. It’s also struck pacts with Stellantis NV and Zhejiang Geely Holding.

What do you think of Apple Inc.’s idea to enter the automotive market? Would you be interested in buying an Apple electric vehicle? Let us know in the comments below. Also, if you found our content informative, do like it and share it with your friends.