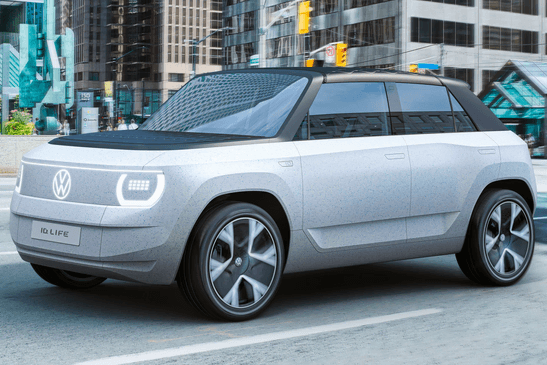 Volkswagen ID.Life concept previews compact people’s car because they want to put more people into electric cars and key to this ambition will be a new compact electric car that’s set  to debut in 2025.

The Volkswagen ID.Life concept car, revealed at the IAA Munich show this week, gives us an idea of what to expect from a design perspective.

The new compact model will slot beneath the Golf-sized ID.3 and the SA-bound ID.4, and the carmaker is aiming for a starting price in the region of 20 000 euros, which equated to around R340 000 at the time of writing.

With a boxy and somewhat cheeky design, Volkswagen will be aiming to turn this into an iconic model – perhaps something of an electric-age spiritual successor to the original Beetle and Golf 1. 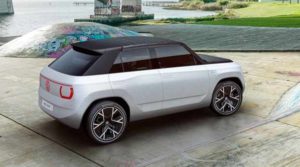 Side and rear view of the Volkswagen ID.Life concept car

The Volkswagen ID.Life is based around a smaller version of the company’s modular architecture for electric cars and it’s the first MEB-based vehicle to be front-wheel driven. The concept’s electric motor produces 172kW, which is enough to accelerate the compact crossover from 0-100km/h in 6.9 seconds.

The vehicle is fitted with a 57kWh battery that allows for a claimed range of around 400km between charges on the WLTP cycle.

“The ID. LIFE proves once again how uniquely flexible the MEB is,” VW board member Thomas Ulbrich said. “It’s the most scalable electrical architecture in the industry. We’re just beginning to tap into the potential of MEB. Performance, charging capacity and range will continue to improve with each new model and software update,” Ulbrich added. 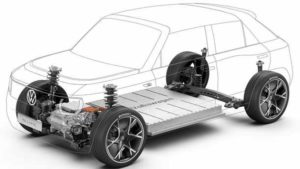 Image of the battery and powertrain setup of the Volkswagen ID.Life concept car

It remains to be seen just how many of the futuristic interior features seen in the concept car will make it to production.

The Volkswagen ID.Life comes with a projector screen that can deploy behind the windscreen when the car is stationary, and this can be used for gaming or watching movies. The interior is configured to suit this too, with a front seat bench that can be folded down completely to create cinema-style seating or a two-metre bed.

The primary driving functions are controlled through a touch panel on the open-topped steering wheel and a smartphone can be integrated into the operating system. 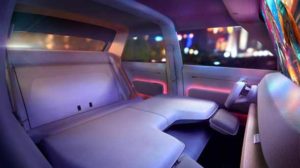 Inside view of the Volkswagen ID.Life concept car, with the front seats folded down.

“In creating the ID.Life, we have consistently focused on the needs of younger customers. We believe that, even more so than today, the car of the future will be about lifestyle and personal expression,” said VW brand CEO Ralf Brandstätter.

“The customer of tomorrow won’t simply want to get from A to B; they will be much more interested in the experiences that a car can offer. The ID. LIFE is our answer to this.”

The Volkswagen ID.Life production model will form a core part of the carmaker’s plan to ensure that at least 70 percent of the cars it sells in Europe by the end of this decade will be fully electric.

What’s your view on the new WV electric compact people’s car concept? Do you think the compact electric car will work in the South African market? Let us know in the comments below. Also, if you found our content informative, do like it and share it with your friends.