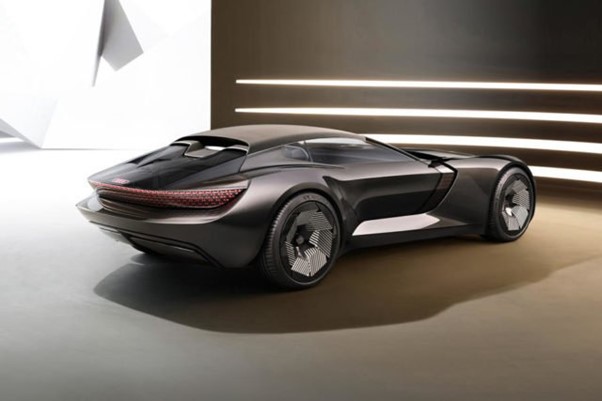 Audi’s latest electric car concept is an all-electric roadster called the Skysphere, with carriage-style doors and oversized wheels that expands and contracts to elongate or shorten its wheelbase with the push of a button.

Audi has unveiled the first of an upcoming trio of concept vehicles, the Audi Skysphere.

Skysphere presages two other concept cars planned for debut this year: The Grandsphere concept, due out next month, and the Urbansphere concept, which will debut in 2022.

“This is the first piece in how we are foreseeing the future,” said Henrik Wenders, the head of brand for Audi AG, at a private preview of the vehicle Aug. 9 at a studio in Hollywood. “The present is offering everything we need for the future … and we had better hurry up.”

News of the concept comes as Audi reports its best-ever first six months in the 52-year history of the modern iteration of the brand, with net cash flow between €4.5 billion ($5.27 billion) to €5.5 billion, up from €3.5 billion to €4.5 billion previously.

In July, parent-company Volkswagen AG lifted its forecast operating return to as much as 7.5%, thanks in part to big double-digit margins at Audi. Closer to home, Audi of America increased deliveries by 92% in Q2 over the same period in 2020. Year to date sales in North America are up 60%, Audi reported in July.

Meanwhile Audi has committed €15 billion to electrification across its entire fleet, said Hildegard Wortmann, the member of the board of management for sales and marketing for Audi AG. By 2025, Audi will offer 20 different electric cars across its global portfolio. Audi’s hybrids and EVs are already profitable and best-sellers in Europe, Wortmann said.

In the United States, 30% of sales will come from electric vehicles by then, a spokesperson said. The hybrid Q5 already comprises 12% of total Q5 sales. So the electric concept series fits right according to plan, she said. “We are not going to do this by half,” Wortmann said. “We want to go the full way. We want to be the leading sustainable premium brand.”

Best of Both Worlds

The variable wheelbase of the Skysphere offers owners two options for transport: the elegant comfort of a longwheel-base grand touring car and the sporty handling of a sports car. When in 5.19-meter longwheel-base form, the car operates on level four autonomous driving and offers maximum, extensive legroom.

The shortened form shrinks the length of the car by 250mm (nearly 10 inches), lowers it by 10mm, and reveals a steering wheel, pedals, and shifting column from underneath the dashboard. Only in shortened form is the vehicle is drivable like conventional modern vehicles.

“It’s about a different way to travel—not just getting from A to B but the space in between,” said Gael Buzyn, the head of Audi’s Malibu Design Loft, at the preview. “As a designer, I design for experience first, and the car follows.” Buzyn said such a transformational structure would never have been feasible on a chassis built for internal combustion. “Electrification is the best thing that has happened to car design,” he said.

An electric motor at the rear of the car delivers 465kw (623hp) of power to the 1,800kg (3,968-pound) car. If tested in real-world conditions, acceleration from 0mph to 62mph would be four seconds, according to Audi. Total range in GT mode is 500km, or 310 miles, the brand said in notes accompanying the car, although brand brass declined to say whether it would ever be made in production form.

The interior of the Skysphere is oriented to support level four autonomous driving—the level at which drivers can delegate complete movement responsibility to the car without having to give any inputs like hands on the wheel or feet on the brake. Seats come in microfiber fabric while eucalyptus wood accents make it feel warm and welcoming, like a private lounge.

The pièce de résistance inside the cabin is the large touch monitor that spans 1,415mm (55 inches) across the dashboard; it can screen movies, connect to the Internet, or host conference calls. To cap it all off, the space behind the drivers’ seat holds two grey cashmere blankets for open-air driving during cooler temperatures.

Audi will debut the Skysphere in public on 13 August.

What’s your view of Audi’s latest concept car called the Skysphere? Do you think it will make it to the production stage and go to market? Let us know in the comments below. Also, if you found our content informative, do like it and share it with your friends.