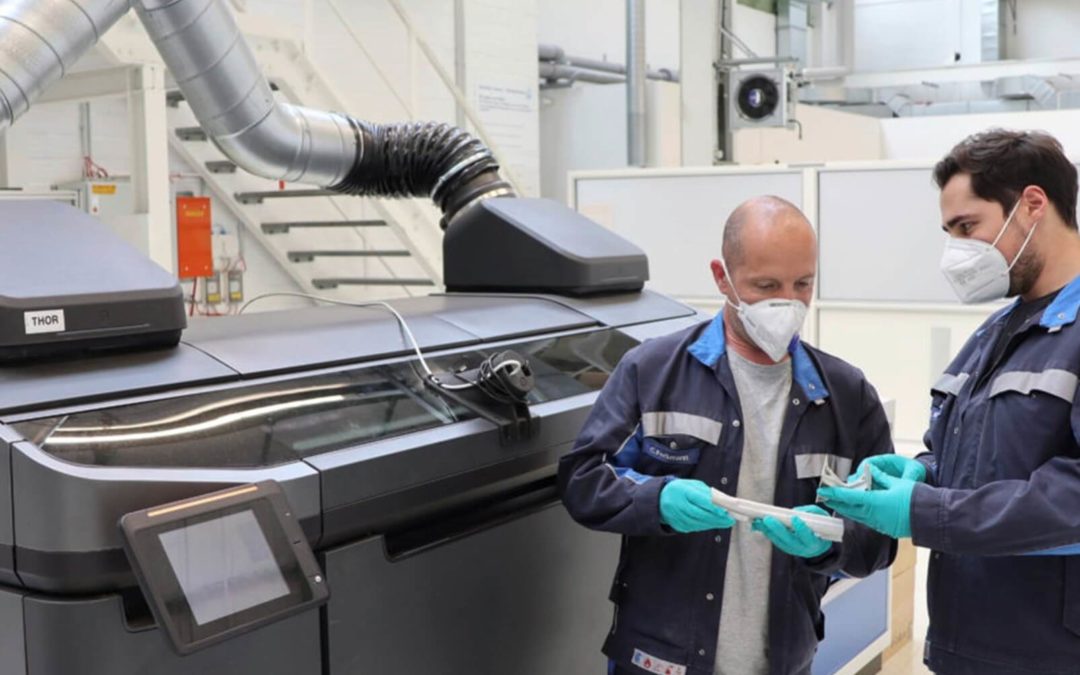 “Together with our partners, we aim to make 3D printing even more efficient in the years ahead and suitable for production-line use,” Volkswagen production and logistics board member Christian Vollmer said in a statement.

“Whereas conventional 3D printing uses a laser to build a component layer by layer from metallic powder, the binder jetting process uses an adhesive,” Volkswagen wrote. “The resulting metallic component is then heated and shaped.”

Volkswagen called itself the only OEM using binder-jet printing in production.

Volkswagen said it could 3D-print A-pillar parts for the T-Roc convertible which weighed almost 50 percent less than sheet steel versions.

Volkswagen said it sent these A-pillar components to the Osnabrück factory producing the T-Roc convertible “for certification.”

Volkswagen said it also has successfully crash-tested 3D-printed metal parts before. It was unclear if these A-pillar parts were among them.

According to Volkswagen, it historically hadn’t been cost-effective to 3D-print large runs of parts.

“However, the new technology and the collaboration will now make production-line use economically viable,” the OEM wrote.

Volkswagen said it had spent “in the mid-double-digit million euro range” on 3D printing R&D over the past five years and will keep working with software provider Siemens and hardware provider HP on the technology.

“With the first full-scale use of binder jetting, they intend to acquire important experience and learn, for example, which components can be produced economically and quickly in the future or how additive manufacturing can support the digital transformation of production at Volkswagen,” Volkswagen wrote.

“… One key process step that has been worked on jointly by Siemens and VW is optimizing the positioning of components in the build chamber. Known as nesting, this technique makes it possible to produce twice as many parts per print session.”

Volkswagen said it has 3D-printed more than 1 million parts using different substrates over the past 25 years.

3D printing could permit the generation of replacement parts on-demand, which could reduce dealer and OEM production and storage costs of replacement components ordered by auto body shops. 3D printed parts also permit — and even encourage — unusual geometries impossible through conventional manufacturing. These shapes might be incredibly optimized for strength and mass — but perhaps to the point that they would be replace-only upon sustaining any damage.

What is your view on 3-D printed parts in a production environment? Do you think 3-D parts will reap major benefits to the motor industry? Let us know in the comments below. Also, if you found our content informative, do like it and share it with your friends.