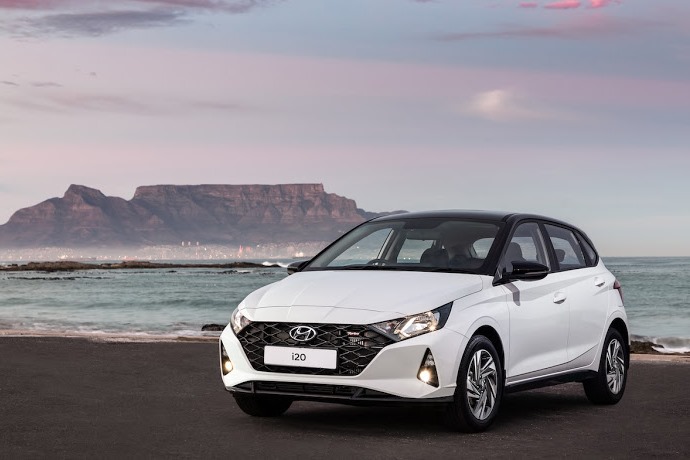 The new 2021 Hyundai i20 unique styling oozes pizazz and ensures that you will not mistake it for its rivals in the market like the VW Polo and the Kia Rio.

South Korean carmaker Hyundai clearly marches to the sound of its own tambourine. Just look at the radical and daring aesthetic that has pervaded their arsenal of products lately.

Cars like the cyborg-like Creta or Santa Fé (with its gigantic cheese grater of a grille) might not be universally pretty, but they sure make for robust discussion. And what about the Santa Cruz revealed in the US last month? In case you missed it, this is a pickup with a genuinely dynamic flavour, based on the Tucson sport-utility vehicle.

No plans to bring that one to our market, sadly, even if the potential for double-cab crazy consumers to spend their money on it exists in theory. Last week Hyundai released the latest instalment of their contender in the B-segment, the i20, of which 106,712 units were sold since initial launch in 2009. 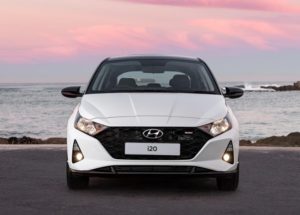 LED lights are lacking – the i20 makes do with halogens.
Image: Supplied

There is certainly a great deal to take in, with a wedged side profile, sloping hood and aggressive pleating. With so much going on, it is very easy to walk away from the hatchback feeling ambiguous towards the styling approach. But you certainly will not mistake it with the serious and straight-cut Volkswagen Polo (from R290,900), or even the related Kia Rio (from R280,995) for that matter.

Since we mentioned those rivals, it would be remiss not to take stock of the others. The new Opel Corsa (from R274,900) joined the market earlier this year, while the latest Peugeot 208 (from R289,900) is already on dealership floors. 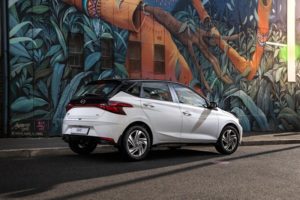 Edgy exterior styling is a departure from the previous model.
Image: Supplied

Hyundai has priced the new i20 from R275,900 for the 1.2 Motion. At the top of the organogram is the 1.0 TGDI Fluid with a dual-clutch transmission (DCT) and two-tone paint job at R360,900. There are a total of eight derivatives in the range, but our time was limited to the priciest offering.

The 998cc, turbocharged, four-cylinder petrol heart makes for effusive performance, complemented by the seven-speed gearbox, which is quick in its reflexes. Engine output on paper might not seem impressive at first glance (89.5kW and 171.6Nm according to the data sheet); but in the real world it was easily up to task for cruising – and overtaking trucks on single-lane, countryside roads. 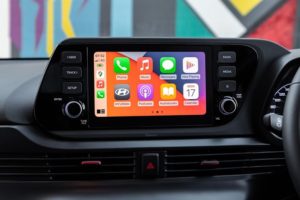 A touchscreen infotainment system is standard on all models.
Image: Supplied

Interestingly, the i20 has highest-in-class ground clearance (170mm, matched by the Opel Corsa) compared to 165mm in the Volkswagen Polo or 120mm in a Ford Fiesta. It is 10mm longer than the previous car, while width has increased by 41mm. Luggage space has seen a fair increase, up 26l to 311l. Basically, one extra overnight bag. The cabin design could be described as expressive, with interesting shapes and contours, while the red accents of our test unit livened-up the sombreness of gratuitous dark plastics. Its chunky four-spoke steering wheel sat comfortably in the palms.

And the digital instrument cluster layout appears to be a near-verbatim copy of what you would find in a current BMW – maybe we have former M-division leader Albert Biermann to thank for that cheeky influence.  In terms of safety, the basic Motion gets dual front airbags, anti-lock brakes and ISOFIX mounting points, while the Fluid gains side and curtain airbags. An electronic stability programme is not part of the mix. It is yet to be crash tested. 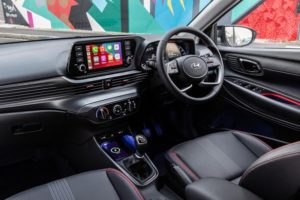 The new i20 is well equipped and sports modern design touches.
Image: Supplied

As is usually the case with Hyundai, the features list is plentiful. Our Fluid benefits from an eight-inch infotainment system (yes, the Apple Car Play and Android Auto boxes are ticked); interior mood lighting; imitation leather upholstery; cruise control; rear air-conditioning ventilation slots; refrigerated glove box; a reverse camera; and wireless smartphone charging. Some shoppers might find the presence of halogen headlamps even on the grade-topper Fluid, a curious point, where certain rivals at least offer xenon bulbs as an option. A seven-year/200,00km warranty is included.

The new i20 is a compelling proposition and, like its predecessors, is likely to remain a staple for Hyundai.

Main Image: The new Hyundai i20 is now available in SA. Image: Supplied

If you were in the market for a new vehicle, would you consider buying the new Hyundai i20? What do you like about the new 2021 Hyundai i20? Let us know in the comments below. Also, if you found our content informative, do like it and share it with your friends.