2021 Toyota Fortuner Is Tough And Sophisticated 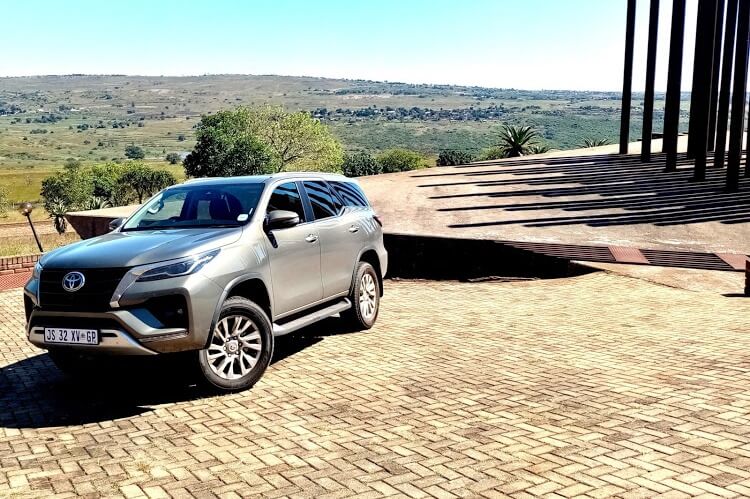 The Fortuner enhancements made for a fuss-free drive up to the famous plane-crash site of the late Mozambican president Samora Machel. Picture: PHUTI MPYANE

The 2021 Toyota Fortuner is tough, sophisticated, the country’s best selling large SUV and also happens to be a most versatile car.

Altogether 966 units of the Toyota Fortuner were shifted in March 2021, and it’s easy to see why. Central to its popularity is SA’s love for travel to far-flung places. With this updated model that debuted six months ago, Toyota has maintained the car’s usefulness while making major improvements. For the flagship 2.8 GD-6 VX 4×4 model on test, this includes a technical change in the engine room.

The vehicle is easily identified with an edgier snout with large chrome strips that separate the Bi-LED lamps and a blacked out mesh pattern grille.

The update has added some fancy tech too in the form of an active cruise control that self-throttles and brakes at speeds above 30km/h.

Gone are the days of rudimentary instrumentation. It now has a digital menu that runs through a 20.3cm touchscreen display with a Lexus-esque look and feel. All of this is surrounded by a luxurious-looking, soft leather-clad dashboard.

Modern facilities such as Android Auto allowed the ease of integration with a smartphone, beaming navigational commands and also tapping into messaging features and importantly for a road trip music streaming. On a recent trip up towards the border of SA and Mozambique, the mostly fine conditions of roads allowed the hushed refinements of better sound-deadening to shine, blocking out most of the mechanical and environmental din and leaving the cabin amiable.

The 2.8l four-cylinder motor is a peach. It’s a quieter and brisker motor than previously due to gains made by the fitment of a larger turbocharger and a bigger bite of 150kW and 500Nm. It accelerates better and makes easy work  of steep inclines.

It also feels as if it wouldn’t sweat much even when filled to its full quota of seven passengers while towing something of up to 3,300kg, a new rating from the previous model’s 3,000kg.

The road to Maputo with the active cruise engaged in two-wheel drive mode used 9.4l/100km. This isn’t a bad score for a large SUV. It’s big, but not Land Cruiser Prado big, which makes it practical and robust enough for similar load lugging and off-road driving exploits. It’s equipped with 4Hi and 4Lo range gearing and a high 279mm of ground clearance.

But the new slickness and pliancy in its general drive quality is evident and brought in by new spring rate levels, dampers and suspension bushes. You’ll feel it on both short and long highway stints. The vehicle powered on briskly while soaking up some of the worst road imperfections we encountered with faint thuds registering in the cabin. 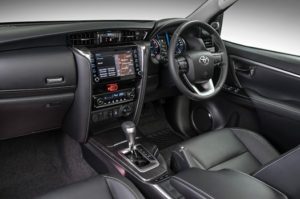 A big change inside the Fortuner cabin is a digitised central display while a long-standing feature is the pair of side-folding seats. Picture: SUPPLIED

But there’s nothing much that can be done about the squeaks and rattles that emanate from the loose and foldable rearmost seats once you hit bumpy gravel roads. Why Toyota still prefers this military infantry seat configuration over a conventional forward-facing bench remains a mystery. This is where the thumping standard fitment JBL sound system comes in to mask it all up.

Other foibles included the powered tailgate not opening remotely using the key fob, while the adaptive cruise control is the old variety that works above 30km/h. It’s probably a move to keep down the costs.

These are minor downers that don’t detract from its popularity or what it is built to do, which is to fit hand in glove with the daily routines of its many fanatical customers who love nothing more than the security and comfort of knowing that at a moment’s notice they can abandon the rat race and school runs to seek out adventure. This is the Fortuner’s mojo!

An SUV made for life in SA

What is your view of the 2021 Toyota Fortuner? If you were in the market, would you buy the Fortuner? Let us know in the comments below. Also, if you found our content informative, do like it and share it with your friends.