46% Of Repair Estimates Include Scanning 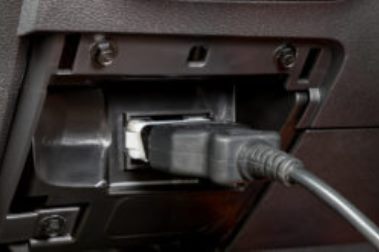 About 46 percent of repairable vehicle estimates in the fourth quarter of 2020 contained at least one line item for a vehicle diagnostic scan, according to the 2021 CCC “Crash Course” released last month.

Fifty-eight percent of current-year or newer repairable vehicle appraisals included a scan charge, and 55 percent of estimates discussed the work on vehicles 1-3 years old. For vehicles 4-6 years old, the proportion sat at about 50 percent in the fourth quarter.

It’s a significant gain over a couple of years ago. In the fourth quarter of 2018, those 0- to 6-year-old vehicles saw scanning percentages between the low 20s and low 30s. On the whole, only a little more than 20 percent of all repairable appraisals contained a scan back then.

OEM procedures and best practices hold that a vehicle diagnostic check should occur at least once during the course of a repair, with many automakers promoting at least two scans — one before the repair to catch damage, and one after it to ensure the vehicle is back to proper working order. CCC found 75 percent of 2020 appraisals with a scan included “two distinct scan entries on average.”

“Pre- and post-repair scans on appraisals have grown dramatically over the last several years, particularly on the newest vehicles where scans help ensure all damage is identified and the vehicle is returned to pre-accident condition,” CCC wrote in its 2021 “Crash Course.”

Still, the CCC data doesn’t demonstrate the kind of universal scanning you’d expect based upon the guidance from OEMs. 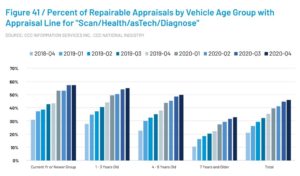 Now it’s possible that some repairable vehicles sustained too little damage to merit a scan. Subaru, for example, orders body shops to scan its “vehicles from model year 2004 and forward involved in a collision.” That OEM says it “defines a collision as damage that exceeds minor outer body panel cosmetic distortion.”

It’s also possible that repairers are scanning vehicles but neither they nor insurers are recording that fact on an estimate. This means CCC’s analysis, which searches for scanning-related keywords within vehicle sheets, wouldn’t have been able to detect the work.

Other repairers and insurers might have written estimates including a scanning line item which carried no charge. Gotsch confirmed that her analysis excluded any operations associated with a $0 cost.

Asked if such zeroed-out scanning operations existed, she said, “I do think it’s happening enough that it probably would add a certain percentage additional on top of what we see when there is a charge.”

Gotsch also said she knew of some shops which charge for scanning involving an OEM tool. However, if they’re able to use an aftermarket device, “they may not charge for it,” she said.

The fourth-quarter 2020 appraisals containing scans billed out an average of $128 altogether for the work, CCC reported. As noted above, most of the estimates containing scanning work included more than one scan entry, and CCC said each of those individual scan lines averaged $64. This is down from what CCC called the peak of $99 in the third quarter of 2018.

The CCC stats on 4- to 6-year old vehicles are particularly interesting, for it was about five years ago that scanning really leapt into the industry consciousness with a series of 2016 OEM position statements.

If your body shop or insurance company back in 2016 was agreeing that “of course, the latest models should be scanned,” while questioning the need to check older vehicles, then logic would dictate you in 2020-21 ought to be writing to scan every vehicle 4-6 years old. It’s still the same technology and model years you said needed diagnostics then.

Only a little more than 30 percent of repairable vehicles aged 7 years or older carried a scanning line item during Q4 2020, based on CCC’s data.

This is potentially problematic. Automaker guidance and common sense still support scanning some or all vehicles in this range. (Subaru’s scan-everything-in-the-last-16-years guidance is actually one of the shorter timespans referenced in position statements. The OBD-II technology alone dates back to the 1990s.)

The younger end of that 7-plus year-range would include vehicles that were still pretty new at the time of the 2016 position statements, such as a 2013 model year. And the higher end of that range is still likely new enough to need a scan. Other CCC data shows the average vehicle gets totaled after 9.68 years. 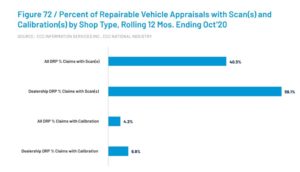 However, 59.1 percent of dealership body shops in a DRP were scanning vehicles during that time, based on the estimates.

CCC’s 2021 “Crash Course” reported 46 percent of repairable vehicle estimates in the fourth quarter of 2020 contained a scanning line item billed at more than $0. (Provided by CCC)

The growing trend in vehicle technology and OEM diagnostic scanning and checking requirements make a sound business case to invest in diagnostic equipment and tools for your repair shop. Have you identified this as an alternative income stream for your shop or do you think a 3rd party outsourced solution suits your business better? Let us know in the comments below. Also, if you found our content informative, do like it and share it with your friends.