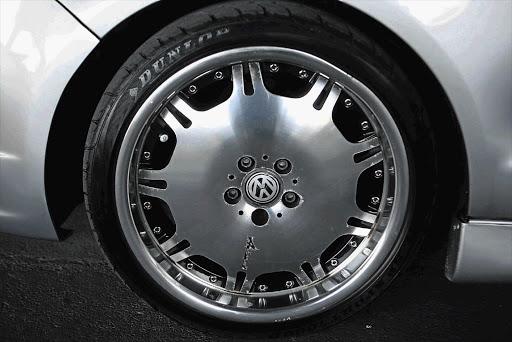 MADE TO STAND OUT: The modified rims
Image: THEMBINKOSI DWAYISA.

Do you know what it will cost you to replace just one of your car’s tyres or rims, you will be surprised at the eyewatering cost of replacing car tyres and rims?

“This raises the question of whether poor road maintenance is to blame,” the insurer said yesterday.

Steep claim increases were recorded in Gauteng, KwaZulu-Natal and Mpumalanga in particular, and “a significant amount of” claims were submitted by men aged between 31 and 37, who drive “newer” vehicles.

Low-profile tyres are particularly prone to damage, he said.

“They may give a vehicle a sportier look, but they reduce the space between the rim and the road surface.

“Rather fit tyres that are in the ‘Goldilocks zone’ between being sporty, offering comfort and protecting against rough road surfaces, and ideally opt for tyres with rim protectors.”

It’s absolutely vital to make sure that you have vehicle insurance,  including tyre and rim cover, in place, Auto & General says.

The legendary Malcolm Kinsey, the man behind the Kinsey Report, which has tracked and revealed the cost of parts for SA’s most popular cars for the past 30 years, made special mention of the cost of rims in his latest report, released three months ago.

“A factor that has become evident is the increase in cost of body parts [as opposed to service and maintenance parts],” he wrote.

Headlights, rear fenders and wheel rims on some models appear to be a great deal more expensive.

“This has a negative effect for everyone as it increases the contribution the owner pays for the insurance excess, and the write-off point for a crashed vehicle, and it ultimately increases premiums one has to pay,”  Kinsey said.

With most motor claims relating to accidents, you can be sure the cost of crash parts has a significant impact on the premium you pay.

Sadly, the 2020 Kinsey Report was to be Malcolm’s last: he died on January 20 after contracting Covid-19.

What a loss! He was a giant in South African motoring circles and the most trusted source on the real cost of car ownership, with most manufacturers using his annual parts price basket to inform their pricing.

I know that many manufacturers have quietly adjusted their pricing downwards after the release of a Kinsey Report.

In the 2020 report’s City Cars & Entry Level category, the Kia Picanto’s crash parts are way out of kilter with other cars in the category.

The next most expensive crash parts basket is that of the Honda Amaze, at R68,800, which is still a lot less than that of the Picanto.

And compare the Picanto’s left-hand rear fender’s price with that of the Hyundai Atos — R14,100 vs R1,900. That’s mindblowing!

I asked Kia SA if it had adjusted the Picanto’s parts prices since they were revealed in Kinsey’s Report.

I got this response: “Pricing of selected Picanto parts has been addressed with our suppliers, and an adjustment will be made to recommended retail prices in conjunction with the introduction of the updated Picanto range effective 1 February 2021.”

Malcolm would have been delighted to know that.

The Picanto also had the most expensive wheel rim in its category at just under R2,900, with the Vivo’s carrying a price tag of R817 and the Datsun Go’s just R652.

At the other end of the spectrum, the Range Rover Sport’s wheel rims sell  at an eyewatering R18,057 apiece!

When you consider that the Range Rover costs about R1.4m, and the Tiguan R560,000 — less than half — the latter’s rim price is the most astounding.

Drivers of the Tiguan’s smaller crossover, the T-Cross, will be relieved to learn that its rim is a relative steal at R2,700.

When the 2020 Kinsey Report was published by the Automobile Association on its website in late November, AA CEO Willem Groenewald acknowledged Malcolm’s enormous contribution.

“[His] thoroughness has again proved pivotal in bringing this much-needed information to consumers to enable them to make better decisions about their vehicle purchases,” he said.

“It’s important for us that consumers understand as much about their vehicles as possible, including that of replacement parts, and Malcolm’s work is providing a credible, reliable and valuable service to motorists in our country.”

RIP Malcolm Kinsey. Hugely missed and never to be forgotten.

Have you picked up how exorbitant and eyewatering expensive it is to replace a rim or tyre on your vehicle? Let us know about your experience and what caused the need to replace your rim or tyre? Also, if you found our content informative, do like it and share it with your friends.