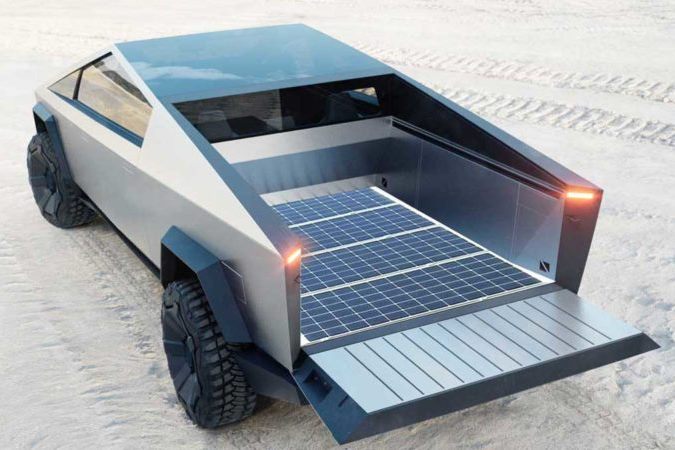 Tesla boss Elon Musk says the Cybertruck could have solar panels as part of its features, but admits that a solar electric van would make “a little more sense”.

A Tesla electric van has been touted before – even though in 2018 Musk ruled one out until Tesla got a few other priorities out of the way, such as the Model Y, the Roadster, the Tesla Semi and what was then known only as “the pickup“.

Sitting down once again with popular podcaster Joe Rogan, the visionary entrepreneur mused on the pros and cons of powering Tesla’s futuristic, angular tank-style vehicle with power harvested only from solar panels on its body.

It’s not possible, said Musk, unless it is not driven often, because you would get less than 20km range per day from the panels.

“You possibly put the cover of the truck bed, put some solar cells in there, so you could just leave it out in the sun,” said Musk in the podcast released on Thursday night (US time). But not more than that, says Musk.

“There’s about 1 kilowatt per square metre of solar energy, you’re going to get maybe 20-25% efficiency …. assuming you’re facing the sun or not.

“You add all those things up and say what are you really going to get…. if you could do ten miles a day you’d be lucky,” he said.

Unless there is some kind of folding solar array on the roof …. which is where the shape of a van starts to make a little more sense, says Musk.

“A van, because you’ve got a big flat area, that’s actually where solar could start to make a little more sense because you could have a lot of area.

“You could have a roof that is solar and when it’s stationary [the awning] goes out and provides shade and tripes your area,” Musk said.

“Then you triple your area and you’ve got a big flat surface, maybe you could start having charging enough that you get 30 miles a day.”

It’s an interesting concept – and one that takes the Sion solar van being planned by German start-up Sono Motors, which is estimated to harvest up to 34km range per day from the sun, one step further.

Musk noted that more than 30 miles (48km) is not really possible – at least not at a price that is affordable, as was previously noted by UNSW solar research Ned Ekins-Daukes as reported by The Driven in 2020.

While the maximum theoretical efficiency of solar panels tops out at around 40% (cells used on the high-tech solar Airbus Zephyr aircraft are 35% efficiency, for example), the cost for a passenger vehicle is prohibitive.

“For a big price increase… you’re talking about for practical purposes …. ten times the cost at least,” said Musk.

Even so, a solar electric van with standard 25% efficiency panels would certainly be an attractive proposition for those who like to go camping, Rogan notes.

Or even, Musk jokes, for those needing to in more extreme events.

“Even if the apocalypse came around you could still drive,” he said.

What are your thoughts on a solar electric van? Do you think that would be an acceptable alternative light commercial vehicle? Let us know in the comments below. Also, if you found our content informative, do like it and share it with your friends.