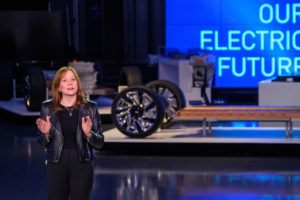 General Motors pledged Thursday to make 40 percent of its models fully battery electric by 2025 and said it wants “to eliminate tailpipe emissions from new light-duty vehicles by 2035.”

Thirty all-electric models will be available worldwide midway through this decade, the OEM said.

“More than half of GM’s capital spending and product development team will be devoted to electric and electric-autonomous vehicle programs,” GM wrote in a news release. “And in the coming years, GM plans to offer an EV for every customer, from crossovers and SUVs to trucks and sedans.”

A spokeswoman confirmed Friday that the goal for 2035 was truly emission-free cars, trucks and SUVs, not partially electrified configurations like hybrids or plug-in hybrids. The plan was to go fully battery-electric, with perhaps some hydrogen fuel cell offerings in the mix. (The only byproduct of fuel cell vehicles is water vapor; GM has called them “zero-emissions.”)

“With this extraordinary step forward, GM is making it crystal clear that taking action to eliminate pollution from all new light-duty vehicles by 2035 is an essential element of any automaker’s business plan,” Environmental Defense Fund President Fred Krupp said in a statement Thursday. “EDF and GM have had some important differences in the past, but this is a new day in America — one where serious collaboration to achieve transportation electrification, science-based climate progress and equitably shared economic opportunity can move our nation forward.”

GM said it would continue to improve its internal combustion vehicles until 2035, which means repairers might still encounter more lightweighting and technological changes on that front.

GM also said it plans to be carbon-neutral by 2040. The term refers to offsetting whatever emissions are still produced with emissions cuts elsewhere or buying carbon credits. The OEM said it would only use renewable energy for its U.S. plants effective 2030 and globally by 2035, five years earlier than it had announced earlier.

“General Motors is joining governments and companies around the globe working to establish a safer, greener and better world,” CEO Mary Barra said in a statement. “We encourage others to follow suit and make a significant impact on our industry and on the economy as a whole.”

Repairers interested in hearing more about electrification at General Motors can hear from some of the OEM’s experts by watching “Global perspective on electrification, safety systems, emerging trends and collision repair.” The virtual SCRS OEM Collision Repair Technology Summit course and more than a dozen other Repairer Driven Education virtual classes will be available for replay — or to watch for the first time — until Aug. 31, 2021.

“General Motors, the Largest U.S. Automaker, Plans to be Carbon Neutral by 2040”