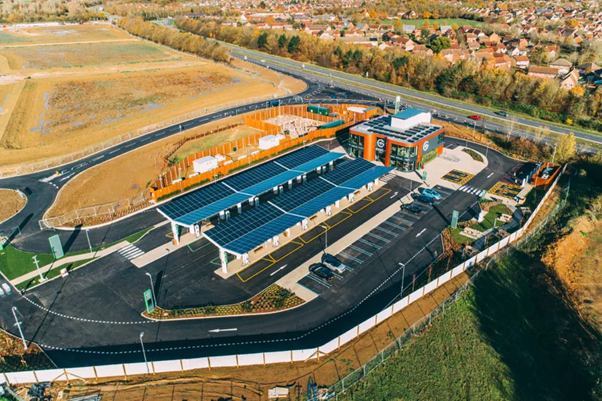 The site is located near Braintree, in Essex. Image: Gridserve

The UK’s first all-electric car charging station opened today near Braintree in Essex, marking a milestone in the country’s transition away from fossil fuel-powered vehicles. The station is operated by Gridserve, and is the first of more than 100 locations it plans to build over the next five years.

The location consists of 36 electric vehicle chargers, delivering up to 350kW of power. That’s enough to provide 200 miles of range in 20 minutes, according to Gridserve. With an initial cost of £0.24 per kWh of energy, the company estimates an average-sized electric vehicle can be charged from 20 to 80 percent for under £10 (less than $13.25). Gridserve claims these are the “lowest ultra-high power charging rates on the market today.”

The station’s chargers draw power from renewable sources, including solar panels installed on the station’s canopies, and the company’s network of hybrid solar farms. There’s also a 6MWh battery onsite to help balance the supply of power during peak times. According to Gridserve, “on windy winter nights the battery can store enough energy to drive 24,000 miles in electric vehicles the following day.”

The station has opened less than a month after UK Prime Minister Boris Johnson announced plans for the country to ban the sale of new combustion engine vehicles by 2030, The Guardian reports, with some hybrid cars and vans continuing to be sold until 2035. One forecast cited in a recent government report estimated that there could be over 10 million electric cars on British roads by 2030, rising to 36 million a decade later.

Although this is the UK’s first all-electric charging station, it’s not the first we’ve seen globally. Last year, for example, a gas station in Maryland in the US replaced its traditional fuel pumps with four electric vehicle charging points. CNBC reported that this made it the first gas station in the country to ditch oil in favor of 100 percent electric vehicle charging.

Article Credit to The Verge.