A Bugatti 16-cylinder Engine For Your Wrist 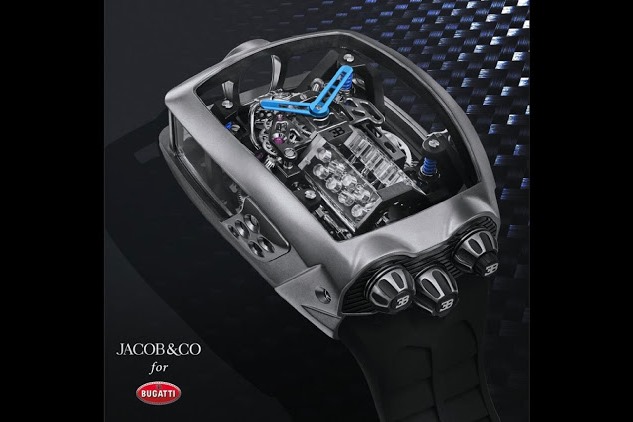 The 490km/h Bugatti Chiron is one of the ultimate expressions of automotive engineering, blending technical wizardry with motorised art.

Now the car has a watch to match. The new Jacob & Co. Bugatti Chiron Tourbillon features a miniature, moving replica of the supercar’s 8-litre 16-cylinder quad-turbo engine inside.

The engine’s numbers make for jaw-dropping reading: even the ‘basic’ Chiron has outputs of 1,103kW and 1,600Nm. A watch inspired by it needed to be spectacular, and this titillating timepiece doesn’t disappoint.

The W-shaped engine’s 16 mini pistons, crankshaft and turbos come to life when the crown is pushed, setting in motion a technical marvel that is miniature in scale but grand in showmanship.

The Lilliputian engine is mounted on four shock absorbers and resides beneath a sapphire crystal. The case is made of titanium, a metal used in some parts of the real-life Chiron.

A fuel reserve gauge shows the battery life, and the watch is water resistant to 30m. And yes, the  Jacob & Co Bugatti Chiron Tourbillon does actually tell the time.

This miniaturised marvel doesn’t come cheap at $280,000 (R5.6m), but this may seem small change to a person who spent around R55m for the car.